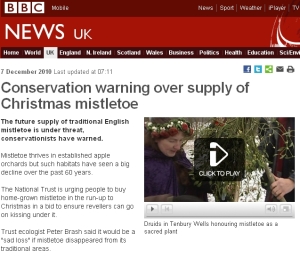 Well, yesterday was interesting.  Loads of mistletoe coverage on radio and TV following the National Trust news story about future of the mistletoe crop.  Lots of slight, and sometimes major, distortions of the story too.

What was the story?  Basically it was about the risk of losing the British Mistletoe Crop (I’m stressing that last word deliberately).  Most mistletoe is cropped from traditional apple orchards, in the sw midlands, where it grows abundantly and is easy to reach.  The ongoing loss of those apple orchards means that this crop/harvest will inevitably become more difficult in future, and so supply of mistletoe at Christmas will become limited, possibly very limited.  Which is, probably, not a good thing (though it would push mistletoe prices up!).

Here’s a direct quote from the story (full story here):

If mistletoe became more inaccessible because of an ongoing decline of traditional orchards and a loss of its main host, fruit trees, then it might become more a premium product with more scarce supply.

So, this is an argument for trying to keep our traditional apple orchards – adding the continuity of the mistletoe crop to all the other arguments for trad orchards – keeping old apple varieties, conserving historic landscape, traditional fruit harvesting, cider-making, juice-making, community focus, and not forgetting biodiversity.

Lots of coverage of this mistletoe angle to orchards, particularly on BBC News and in online versions of  newspapers.  A few examples:

Nothing unexpected in this media distortion of the story (normal behaviour in my experience!), but it is very frustrating, as readers and commentators are getting the wrong story, and are pooh-poohing it as they can’t see a threat to mistletoe as real.  Well that’s because it’s not about a threat to mistletoe.  It’s about a threat to the UK crop, and is making a case for better management of our remaining traditional orchards to help protect that crop long-term.

Why is that so difficult to get across?

Actually, the BBC coverage (TV version) was very good, but some of the versions that made it to local radio were a bit wide of the mark.  The Guardian’s online headline “Mistletoe could vanish within 20 years, says National Trust” was exactly the wrong thing to say – and many of the resulting comments did show a complete misunderstanding of the issue.

If you’re interested in this mistletoe cropping issue, do take part in our mistletoe: where do you get yours? questionnaire – linked below:

Remember to do the mistletoe survey! www.british.mistletoe.org.uk