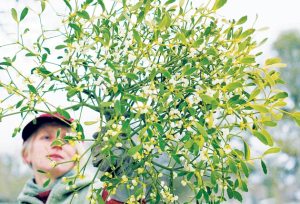 Further coverage of the long-term mistletoe harvest story this weekend, with the biggest feature in the Independent.

But still there is some misinterpretation, either by the press or by commentators who mis-read the story.  One comment on the Indie coverage accuses the National Trust of irresponsible scaremongering in predicting mistletoe’s extinction.  Which would be a valid point if they were predicting its extinction.  But they aren’t. They’re predicting a future major problem in the supply of mistletoe – i.e. a significant loss of accessible mistletoe from apple orchards, not extinction.

It’s the commentator, ‘Philthebotanist’, who is scaremongering, and falsely accusing the NT of  doing ‘the overall cause of conservation a disservice’.  It seems to me that it’s ‘Philthebotanist’ who’s doing the disservice here, by not reading and understanding the issue before writing about it.  I’m not sure who ‘Philthebotanist’ is, but I hope he’s not the northern academic botanist, called Phil, who springs to mind, as he should be more wary of what he writes.

Here’s another example, this time of clear mis-reporting, by BBC Cambridgeshire.  They spoil a good story about a local mistletoe farmer (a rare thing in Cambridgeshire) with this line “Naturalists are warning that mistletoe could die out in Britain within the next 20 years.”  Nooooo!  No-one said it will ‘die-out’.  Just that the crop will be hugely reduced.  Not the same thing at all.