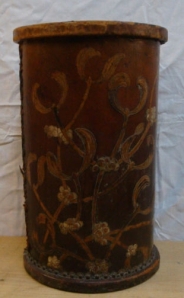 Now here’s a unique opportunity for mistletoe-lovers.   A leather umbrella stand, with a mistletoe motif.  What a wonderful concept.

It’s obviously from Art Nouveau mistletoe design tradition – which is mostly continental (French and German) But in this case it’s (apparently) British (‘only available from Finnigans of New Bond St’).

The must-have feature for any mistletoe-themed home.  An Ebay auction – which finishes tomorrow – so get your bids in! 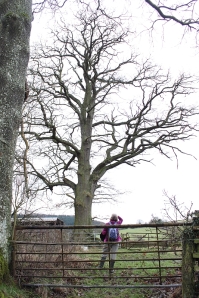 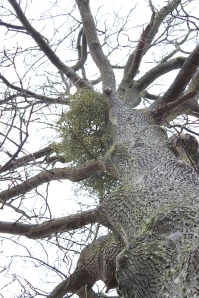 Recently spent a few days in Cambridge area and, of course, took the opportunity to go mistletoe-spotting.  Cambridge is well outside mistletoe’s core range, but there’s a fair bit about if you know where to look – which we did as I took along a print-out of the old 1990s national survey data for the area as guidance.

﻿At this time of year mistletoe-spotting is easy – you just drive around and look for it in the leafless trees, and if you’ve got a load of gridrefs and locations to check out it’s even easier.  BUT don’t try this alone – you really have to have a willing sidekick (mine’s called Caroline) to navigate/look for the mistletoe, or to drive whilst you navigate/look out of the window – otherwise you do tend to go off the road (they have an interesting line in roadside safety around here – “slow down, don’t drown” – because of the many large fenland drains alongside roads).

According to that 1990s dataset there’s an odd pocket of mistletoe just to the north of the city – centred on the village of Cottenham (it’s a little bit drier up here in the Cottenham area – reaching a giddy 10+m in places – so there’s a reduced chance of drowning whilst exclaiming “look at the mistletoe over there!”).

Why is it there?  Well, according to the old (1970s vintage) OS map we had with us there are, or were, quite a few orchards around those villages, so maybe it was associated with the apple trees in those.  Was it perhaps introduced as a Christmas crop?  Probably. I doubt it got here by itself.  But there’s another pocket of mistletoe in Cambridge city – quite a well-known population actually, centred on the University Botanic Garden (see below), so maybe this northern population came from there?  (Or maybe it was the other way round?  Or maybe there were several independent origins?  Actually we just don’t know… but speculating is fun…).

Whatever the origin we soon found several locations in the Cottenham, Rampton and Waterbeach/Landbeach areas – some associated with apple trees and orchards (though most of these had vanished) but a few in gardens and on limes (esp in Cottenham centre).  The apparent losses, since the 1990s, were interesting – though we found some new sites too – an old orchard with mistletoe at Rampton wasn’t in the 1990s dataset at all. 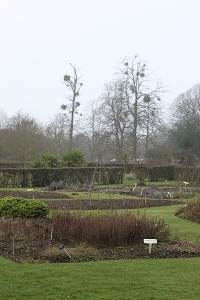 A couple of days later I spent a few hours at the Botanic Garden, meeting up (at v short notice, so many thanks to them) with Tim Upson (Curator & Deputy Director)and Mark Crouch (Arborist), discussing their mistletoe population, its (unknown) origins, and its recent spread to other trees and shrubs.  It seems to be on the increase locally – though there’s no obvious mechanism.

There’s clearly good potential for a University of Cambridge mistletoe project in all this – why is it in the area, how long has it been here, and what is it doing next…  Not to mention all the potential to look at the specialist mistletoe insects, in a mistletoe population fairly isolated from the main mistletoe centres.

Have been out and about in local (Gloucestershire) apple orchards recently examining their mistletoe for signs of overwintering mistletoe insects.  Little is known about the biology of our six mistletoe specialist insects, and how they spend the winter, and how they emerge, is one of many mysteries.  I reviewed current knowledge on these insects, and challenged some of the assumptions being made about them, in a recent paper – which, if you’re interested,  is downloadable here)

Accepted wisdom says that the Mistletoe Marble Moth spends the winter as a young larva, within a tiny leaf-mine in mistletoe leaves.  These mines are, so the accepted story goes, crescent- or comma-shaped.  Well, I’ve been round lots of orchards this week, and examined (very) large numbers of mistletoe leaves,  and the only tiny leaf-mines I’ve seen have been straight ones.  Is that the moth?  Or something else entirely?  I don’t yet know…

The four mistletoe bugs shouldn’t be active yet – far too early.  But how do they overwinter?  And what were the instar (larval) bugs I’ve seen this week, already crawling, very rapidly, through the mistletoe? 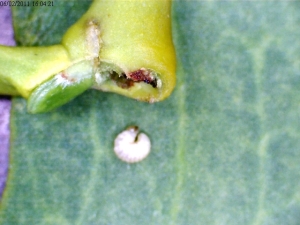 And then there’s insect number 6 – the mistletoe weevil.  Last summer I found that their habit (as larvae) of eating away the mistletoe stem, within the plant tissue, just below the terminal bud, often killed that bud.  So, this week I’ve been looking out for dead terminal buds without an exit hole (a hole shows that the adult weevil has emerged).  And I found several – which, on dissection (see pic left), provided me with a rather annoyed-looking weevil larva.  So that’s how they over-winter – within their cosy little homes inside the stem…

And we mustn’t overlook the pollinating insects.  Our mistletoe flowers now – February – and it is insect-pollinated.  That might seem odd for February, but it seems to work, so it can’t be that peculiar!  Again, conventional wisdoms say that it is pollinated by small flies, and certainly today, in the sunshine, there were several gnat-sized flies frequenting the mistletoe clumps.

But there were also bees – proper honey-bees (see pics below) – probably finding that mistletoe was one of the few plants available to them this early.

Recent mistletoe news from New Zealand makes an interesting comparison to  mistletoe conservation concerns here in Britain.   Down there they’ve had several native mistletoe crises in recent years, last mentioned (briefly) in this blog way back in 2005.

The news then was about mistletoe conservation efforts on North Island – where the problems were invasive weeds and over-browsing by possums.  Efforts seemed to largely be tree-planting and weed-clearing. The original news story is still available here.

The more recent story, dated 30th January 2011, is on South Island, where conservation efforts have, again, been largely pest control, but where the mistletoe is at the top of 100 year old beech trees (there’s a video here).

And it’s one of those loranthaceous types, with pretty flowers.  Very different to ours, with its tiny green flowers – I’ll be saying more about those soon…