The last Mistletoe Diary entry discussed some online mistletoe traders in the UK, but what about mistletoe traders from over the channel?   Is that trade good, bad, stable or changing? Should we Brits (especially those promoting British-grown mistletoe) be worried about it?

Every season there’s always a hint of paranoia over here about this.  French Mistletoe Imports On The Rise scream the tabloids.  Often followed by stories claiming French Mistletoe has fewer berries, or yellower leaves, or is ‘diseased’.   And yes, it is always ‘French’.

There’s even a belief that it’s a different species (it isn’t).  When I supplied pictures to a municipal event in Worcestershire last year labelled ‘European Mistletoe, Viscum album‘ they were rejected – ‘we want pictures of English Mistletoe please’, they said.  Er, that is English Mistletoe I responded – they were pictures of the English crop of European Mistletoe. The phytogeographical element was, perhaps, too subtle or too botanical for them, but England is, last time I checked, part of Europe (certainly in the geographic sense –  I won’t comment on the EU aspect of that just now).

There are even suggestions, each year, that the French harvest is somehow different, or easier. But it isn’t – it’s mostly from decaying old apple orchards just the same as the UK crop, and, just like in the UK this mistletoe harvest will diminish as those old orchards continue to be grubbed up or neglected to death.

So not many of those beliefs seem to stand up to scrutiny. What about the Imports On The Rise scare?   Surely this French cropping and export to Angleterre is new?  Er, no, that’s not true either.   Britain has been importing mistletoe from France, and other European countries since at least the 1890s.  Cross-channel ferries of that time had decks piled high with mistletoe in the weeks before Christmas. We probably never grew enough to satisfy seasonal demand after the Victorians popularised the kissing custom. 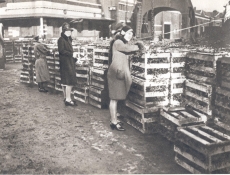 By the 1930s the French imports were the dominant source – out-classing UK traders in the run-up to Christmas.  So no, imports aren’t new, and there’s no evidence they’re increasing either. [the three pics show 1920s &30s French harvesting, mistletoe arriving at Southampton, and then arriving at a London Station].

What about smaller berries, yellower leaves and disease? No evidence for that either, other than a logical deduction that since the French stuff might have spent a wee bit longer in transit it might look a bit tired. But, with no labelling, how can you tell if a sprig is French or English (or Welsh – there’s a good crop down in Gwent)?  You can’t.  They look the same.

So imports aren’t new,  they’re not increasing, they’re not a different species,  and they’re not lower quality.  But they are definitely French aren’t they? Peut-être, mais peut-être pas…

In recent years, with the opening up of Eastern European trade there’s been a lot of interest from wannabe mistletoe entrepreneurs in the east.  Every season I get enquiries from Poland, Romania, Bulgaria etc. ‘We have lots of mistletoe, how can we sell it to the UK?’ they ask.  This year I’ve added Ukraine and Transylvania (ok, that’s part of Romania but it’s too cool a name to omit) to the enquiry list.

So what do I tell them? Well, I tell them that it might not be as lucrative as they think – wholesale prices are very low and may not cover their petrol (certainly not their man-hours).  But if they can line up decent buyers – hotel chains, party organisers etc, especially in London, they might get a return. But only if the mistletoe is fresh-looking on arrival – no-one will pay decent money for some droopy twigs that last saw a tree 2 and a half weeks ago. Transit time must be short.

And do they go ahead and bring mistletoe over?  I have no idea.  Feedback has been minimal – and I’ve not yet heard of anyone selling Bulgarian mistletoe in London.   If you know, do get in touch.