Where do you get your mistletoe?  It seems a simple question, and it was asked here last year (for the 2010 survey).

It’s not really a simple question of course. Recent posts here have highlighted the issue of imports, and not knowing where they’re from (or even if they’re imports!) and there are difficulties in determining local provenance too.  So do you know where yours comes from? 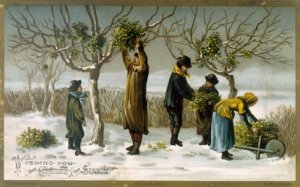 Some people seem very sure, despite making unlikely claims.  In the December issue of BBC Countryfile Magazine TV presenter  Ellie Harrison states that she gets hers ‘by going for a walk in the woods at Randwick’ near Stroud, and implies this is a family tradition.  But mistletoe isn’t a woodland species (it only thrives in trees in open habitats), and Randwick Woods (which I know well, I live 2 miles away) are not a mistletoe habitat.

There’s lots of it in the surrounding countryside of course, as Randwick is in the middle of mistletoe country – but if you wanted to pick it you’d go to a local apple orchard (plenty just below Randwick Woods in the Severn Vale, and a few remnants in Randwick village) or to the churchyard limes, or a local back garden, or to the scrubby hawthorns and whitebeams of the common land around Haresfield Beacon (a 15 minute walk from Randwick Woods).    There’s mistletoe in all those places and habitats.  But you wouldn’t (sorry Ellie), you just wouldn’t, go into Randwick Woods to look for it.  Why would you even try?  Even it was in there it would be easier to pick and hugely more abundant in other habitats close-by.  Perhaps Ellie is muddling up memories of family holly gathering expeditions – far more realistic a prospect for the woods.  Though you would expect better grasp of ecology and foraging from a BBC countryside presenter.

[I hardly dare suggest direct confusion with holly though, unlikely as it sounds, there ARE a lot of people who confuse holly and mistletoe.  Click here for a previous year’s rant about that issue in the US]

The Randwick Woods story does, unwittingly, illustrate the the much larger uncertainty over mistletoe-gathering – who does it, and where.  Last Christmas, Mistletoe Matters ran an online survey project asking where people got their mistletoe – shop, market, their own garden etc.  Results were, in some ways, not what might be expected.  Though 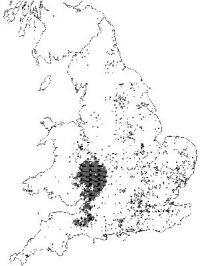 some was from supermarkets, greengrocers and street markets the proportion in those (6%, 20% and 18% respectively) was small compared to the number who picked their own from the garden (37%) or from the countryside (10%).

With mistletoe being relatively scarce over much of the the UK, and difficult to find in either gardens or countryside outside its main distribution area of the south-west midlands these figures are a little surprising.

But there is almost certainly a strong bias, in the respondents, to the ‘mistletoe-aware’, people who understand a little about the plant and where it grows, and either live in that south-west midlands area or are actively encouraging it in their garden outside of this area.  That explanation is impossible to prove of course, as the survey did not gather location data – perhaps it should have done, but it’s too late for that now..

And there is an echo, in that 10% picking their own in the countryside figure, of a 9% picking their own figure from a UKTV survey back in 2007.  At the time I was a little scathing about that result, pointing out that it seemed very unlikely – for the reasons given above.  I still stick to my disbelief on those data – though am now forced to admit that my own survey data agree with it!  But both are, almost certainly, reflecting some bias – either in those completing the questionnaire (in my case mistletoe afficionados) or in the questioning and style of the questionnaire (the impression gained from the 2007 survey was that it was a ‘life-style’ thing – it included the equally unbelievable claim that 65% of Brits have champagne breakfasts on Christmas Day).

Looking for mistletoe this season?  have a look at the recent review of online mistletoe suppliers in the UK, including, of course the English Mistletoe Shop, which I help run, and offers the best deals (well, I would say that wouldn’t I?) on mistletoe grow-kits, books and cards, as well as mistletoe…