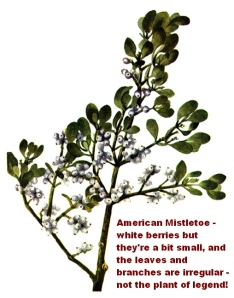 Whilst we’ve had a ‘bumper crop’ and a ‘glut’ of mistletoe here in the UK they’ve had a shortage over in the USA.

Theirs is a different species of course, and not really anything like ours – except that it’s a tree parasite with white berries.

That might (white berries etc) seem to be all that matters, but have a look at the shape of the plants – American v European:

Ours is the real mistletoe of ancient traditions, and I think it shows – ours has real class, with unique forking branches, and perfectly paired leaves, giving it a striking symmetry as well as the white berries of intrigue.

No druid in their right mind would trouble themselves over those scruffy stems of the US-version – why would you think those were magical?

But I digress. Magical or not, that (sorry) US mistletoe has been in short supply this season. And no, it has nothing to do with orchards – the US mistletoe ‘crop’ is taken from trees in the wider countryside, not farmed trees, and it is (this is the US remember) often shot down. None of that climbing up a ladder business we do over here…

[Our druid ancesters must be spinning in their graves at the thought of the plant of peace being harvested with a shot-gun.]

So, why has there been a shortage of US mistletoe?  Basically it’s been too dry for it, and it doesn’t thrive in drought conditions.

Most of the Christmas crop is from the south, traditionally from Texas, where it is marketed in small towns like Goldthwaite and Priddy and shipped across the country. A weeny bit similar (though not much) to Tenbury Wells in Worcestershire, England.

Here’s a quote from one of the largest suppliers Tiemann’s of Priddy:

One of the country’s largest suppliers, Tiemann’s Mistletoe in Priddy, Tex., has halted shipments for the first time in its 58-year history.  “If you have been kissed under the mistletoe and it was bought, there’s a 95 percent chance it came from us,” said Robert Tiemann, the owner.  But not this year. “There’s not enough mistletoe in the State of Texas to run a commercial operation,” said Mr. Tiemann, who is known as Speedy.  He estimated that 60 to 70 percent of the plants in the state have been compromised by the drought, which has been the worst in Texas history. Many retailers and wholesalers in New York have had to reach out to suppliers as far west as California to get the plant. 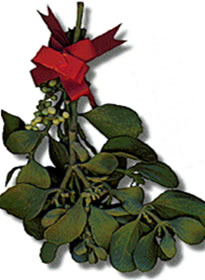 The quote is from the New York Times – which also comments that some people don’t like the plant:

“It’s an ugly little bush,” said Gardel Prudent of Gardel’s Greene Garden in Fort Greene, Brooklyn, who will not carry mistletoe this year.

And yes (look left – this is a genuine promotional pic for US mistletoe), it often is an ugly little bush – the tradition of adding a red ribbon seems to be from the US – probably to make it look more presentable…

(take heed girls – this scruffy bit of greenery is what Justin Bieber is singing about – not the true mistletoe of Europe, which he’s probably never seen…)

The full NYTimes report is here – note that some people had to be told the difference between holly and mistletoe, and were then shocked at how pathetic (sorry!)  their mistletoe actually is – perhaps it’s no wonder a lot of Americans substitute holly for mistletoe – compared with their mistletoe species holly is far more presentable. 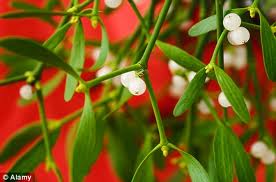 Unlike here in Europe where the holly may be jolly but the mistletoe is kisstletoe (sorry, can’t think of a better slogan just now…  I’ll get me coat…)