Europe’s in crisis, the media are in a reporting frenzy, and the cartoonists are struggling to depict the increasingly complex situation. Does mistletoe have a role? 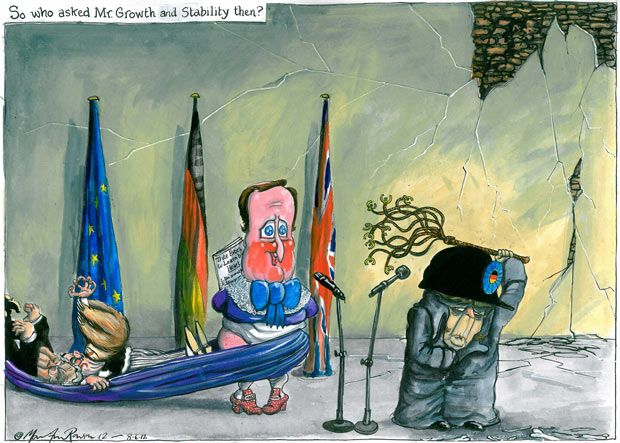 Maybe.  This cartoon, by the Guardian’s Martin Rowson and published on 7th June, caught my eye earlier today.

It shows PM David Cameron, his clothes unravelling to expose Chancellor George Osborne, Bank of England head honcho Mervyn King, and the Fat Cat Bankers (represented by a cat) falling out from his loins. Which is worrying.

And then there’s German Chancellor Angela Merkel, dressed as Napoleon (kinky!), standing in front of them.

But what IS she holding? Surely not mistletoe?  Surely not trying to entice sweet innocent David Conman and his cronies into her embrace?  Will they resist?  What will this mean for Europe?

But no, it’s not mistletoe.  Though it looks like it, and is being held like it and so my mistletoe-tuned eyes did, briefly, deceive me.  It’s actually a Cat o’ Nine Tails whip, with ends made of Euro symbols € .  What’s Angela going to do with that?

I dunno – I lost interest as soon as I realised it wasn’t important or mistletoe-related.

PS Does this raise an interesting question of whether there’s anything to be read into the similarity of a € symbol and a mistletoe terminal leaf pair with central bud? Probably not.