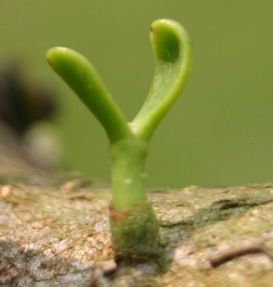 It’s that time of year again. When people (and the media, today it was BBC Suffolk’s turn) ask, how do I grow mistletoe? And expect to be told ‘how to do’ details now, at Christmas-time, as that’s when they have mistletoe.

But no, now is not the time for planting.  Planting time is a couple of months away – in February, March or even April.  When most people don’t have any mistletoe…

Now is also the time when enquiries come in from people who have started growing mistletoe and now, 10 months later, are worried the tiny growths they have are too small. But no again, tiny is exactly correct for the first 12-24 months.

So, with these enquiries in mind, and at risk of telling regular Mistletoe Diary readers stuff they’ve heard before, here’s a summary of how to grow it and what to expect in the first few years…

Firstly, as always, ignore the advice in most gardening books and from most garden ‘experts’ to cut a nick in host bark and place seeds under this or under tape.  It’s unnecessary, counter-productive and kills most of the seeds. It’s also, probably, why most of that advice is usually accompanied by a comment that the seeds rarely grow. Of course they rarely grow if you cut the bark or hide the seeds – you’re killing them

The way to grow mistletoe successfully is to mimic bird sowings – the seeds, covered with sticky mucilage from the berry, are adapted to stick to the outside of the host bark, exactly as they would be if wiped or excreted by a bird.

And they are photosynthetic – they need light to survive – so they must be on the outside of the bark.

And er, basically, that’s it; stick the seeds, using their own glue, to the host bark.  And wait…

It’s slightly more complex than that of course – you need to choose the right sort of host and the right size of branch with, ideally, relatively thin but intact bark. But basically you just glue the seed on.  And in the right season – February to early April.

And, as above, wait…  For some time.  Germination itself, in February and March, is fairly fast, with the seed sending out one, two or even three tiny green shoots (many seeds have

multiple embryos and so give rise to twin or triplet plants).  These shoots bend round to meet the bark within a few weeks and then –  nothing seems to happen for about 12 months.  Sometimes longer.

But things are happening out of sight – the shoot has penetrated shallowly, just as far as the host cambial (growth) cells, and is busy establishing connections for water supply and persuading the cambial cells that it, the mistletoe, is a legitimate part of the tree. This takes some time.

So, after 12 months your mistletoe shoot may look just the same as it did at 3 months.  But, as long as it is still green it is doing ok.  You just have to be patient. Even when it does start to grow a little, in year 2 or 3, it may only produce a couple of leaves. But once it is really established every shoot will divide into two every year, and growth will soon seem very rapid. 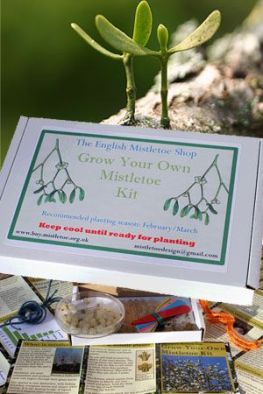 There’s more advice on the Mistletoe Pages here – and, if you want more help or just don’t think you can get mistletoe in the spring, you can try using one of the Mistletoe Grow-Kits from the English Mistletoe Shop – available from the main site here, or our special grow mistletoe shop here.

And, if you want to give a kit at Christmas you could give one of the Grow-Kit Gift Cards – made for you to give at Christmas and for the recipient to redeem, for a Grow-Kit, in spring.  Full details of all these are on the main shop page here, or the grow mistletoe shop page here.