A quiet season so far, with Morrisons, giving out mistletoe in their supermarkets again, decisively in the lead (nothing to do with me – I helped their media campaign in 2015 but haven’t been asked back!).  Their campaign was trending all over the place yesterday – getting promoted in lots of local newspapers across the UK, plus a few national (e.g. the Mirror) and going viral on bargain-hunting websites, including Martin Lewis’ MoneySaving Expert and on HotUKDeals.  Those have a lot of followers.  But their angle is about getting free mistletoe, whereas Morrisons, by giving it out free, claim their story is about continuing the kissing tradition (they commissioned a survey last year that said only 14% of people kissed under mistletoe, and 71% under 35 never had).

Morrisons story is of course also, and very much so, about getting people into their shops – so going viral online suggests significant success.

Part of the Morrisons story, as reported in the papers, is that mistletoe is very expensive this season, due to the ‘mild winter’ last year reducing the amount available.  This is, of course, rubbish.  There’s plenty of mistletoe about, with lots of berries, but the high prices at the first of the Tenbury Wells mistletoe auctions this year caught media attention, so an explanation was invented (I’m not sure by whom but I have my suspicions!) and the story has stuck. 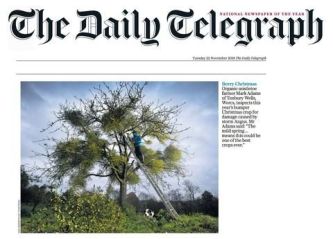 Other mistletoe media in Britain has included the usual ‘man up a ladder’ pic in the Daily Telegraph (this year featuring Mark Adams) way back on 22nd November.  If you can read the caption (sorry, only have a low-res version) on the pic you’ll notice Mark is saying the mild spring means this could be one of the best crops ever. Compare that to the current round of nonsensical ‘mistletoe shortage due a mild winter’ mentioned above.

Talking of inaccuracy, what’s the Sun’s coverage been like? Well, they’ve run a big feature about mistletoe traditions, a little light-weight but in keeping with the paper, and illustrated with a big pic of berryless US mistletoe,  – without noticing that it’s not the right species and without the crucial white berries – and so missing the point entirely (ironic, as their picture caption says ‘Mistletoe is Traditional’).

The Sun, and others, have also run a story about Poundland stores selling a Christmas decoration mis-spelling mistletoe as misteltoe.  This spelling error was spotted by 6 year-old Maisie from Norfolk, not by Sun reporters.

Much more accurately, in the Times, Matthew Oates has covered mistletoe in the Nature Notebook column, referring to the abundant crop this year and discussing its interesting bird and insect associations.  I’m mentioned too, but somewhat bizarrely described as being responsible for the abundance because I’ve ‘inspired recording effort’ (i.e. promoted the spotting and recording of mistletoe for ecological databases). I assume something got lost in a sub-edit – as recording effort doesn’t make abundance, it merely records it.  And, if I was to be really pedantic, I would point out there has been no major recording effort for mistletoe since the 1990s, twenty years ago. That was certainly championed by me, but it was some time ago!

Meanwhile, across the pond, there is the usual rash of lightweight and trivial mistletoe stories.  The only one I’ll mention here is the announcment that, not surprisingly, Six Flags did establish a new mistletoe kissing record. Read all about on Fox News. 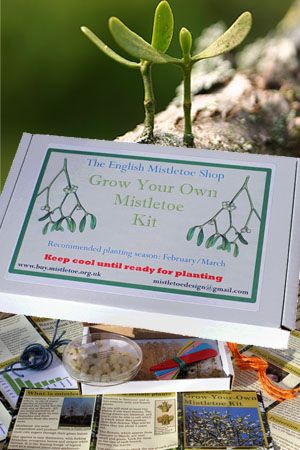 More Mistletoe Matters – links to mistletoey things to read, buy or do