Two more grand old mistletoe men were lost to us in 2017 – Reg Farmer and Alec Wall – both of Tenbury Wells.  I first met them both back in 2003, or maybe 2004, I can’t recall exactly.  They were hoping to promote Tenbury Wells’ mistletoe heritage at a time when it seemed that the mistletoe auctions were soon to cease. Others involved were Stan Yapp (the ‘Mistletoe King’, who died in 2013 aged 80) and local author Jen Green (still with us as far as I’m aware!).  They persuaded me to join their campaign and the five of us formed a business partnership – Tenbury English Mistletoe Enterprise, or TEME for short.

Reg, a farmer by profession as well as by name, died in August, aged 88, after a remarkable career in local government and politics, beginning in 1961 on Lindridge Parish Council and only finishing in 2011, during which he spent many years representing his area at District and County level, twice as Chair of Malvern Hills District Council and also their first and only honorary Alderman.  Alec, a former police detective who had retired to the area to farm at Stoke Bliss, died in September, aged 82.  He too had taken an active role in local politics, also serving several stints as a local councillor.

TEME’s aims were to keep Tenbury’s mistletoe trading tradition alive through whatever trade and promotions we could think up.  And we really thought the auctions would cease (the auction site was being sold and the auctioneers who ran it were moving out of town) .

On the promotional side we created the Tenbury Wells Mistletoe Festival, along with National Mistletoe Day and the Mistletoe Queen, all of which seem like long-established fixtures now.  And we (mainly me actually) encouraged the druid Mistletoe Foundation to bring their mistletoe ceremony to town each year – this is also now an established fixture.

On the trading side we launched Britain’s first online mail-order mistletoe business, sending Tenbury mistletoe all over the country (and beyond!) and launching a range of mistletoe-related products including Grow-Your-Own Kits.  All of this was surprisingly successful – not particularly remunerative in financial terms but immensely satisfying.  And whilst TEME disbanded some years ago our online mistletoe trading concept lives on through many other similar sites – which I like to think were inspired by us.

Meanwhile, to our slight surprise but immense relief the auctions carried on, albeit at an out-of-town site, run by Nick Champion (who had been employed at the old auction yard) who set up by himself and keeps the mistletoe auctions going (to the present day).

That TEME team was a mixed bunch though – Stan was an old-fashioned farmer and mistletoe trader, Jen was primarily promotional, utilising her substantial experience in media and marketing work.  Alec was the practical man, with a police and agricultural background, running all the admin (considerable for the online business), Reg, with huge local agricultural and political knowledge, was the contacts and ideas man.  I, by far the youngest, brought technical mistletoe knowledge, online know-how and media and promotional experience from many years in environmental media work.

Despite, or possibly because of, this breadth of background and experience  it wasn’t always sweetness and light within TEME – there were a few falling-outs now and then!  And sometimes with the conservative Alec and Reg it was best (for me) to avoid mentioning politics (though I do still miss some of the arguments!).  But I think TEME’s legacy is secure – the Mistletoe Festival is now well-established and mistletoe trading continues to thrive – both at the auctions (for which we can thank Nick Champion rather than TEME – though we did substantially help their promotion!) and via the various online trading companies selling direct to the public, probably inspired by TEME and most of which are still, directly or indirectly, associated with Tenbury.

So thanks Reg, Alec and Stan – for your mistletoe legacy.  It was fun too. 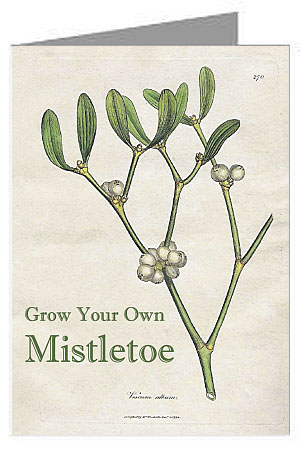 And, if you want to try to grow your own mistletoe, Grow-Kits inspired and developed from the original ones I designed for TEME are available from the English Mistletoe Shop: