I usually post a summary of the wholesale mistletoe prices at the Tenbury Wells Auctions – so here, for the record, are this year’s figures, taken from Nick Champion’s reports:

Compare these to 2017’s prices, which were much lower. 2018’s sales, to use Nick Champion’s words, “saw a terrific trade on best quality lots”

As usual do note these are wholesale prices for freshly cut mistletoe – the retail price will be much higher as the material needs to be sorted, a lot of it discarded (there’s a lot of waste in mistletoe!) and the best bits trimmed and prepared for sale. The retail price will largely reflect the time taken to do all that.

Mistletoe berries need bees – a fact that’s often overlooked when people talk about the ‘crop’. They interpret berry numbers as being a function of the recent summer or autumn weather, and barely give a thought to their real origin – from flowers that need to be pollinated.

Flowers that open in February. And need to be pollinated by insects – bees especially. It’s the amount of pollination that determines the number of berries – and that depends on bees and other insects in February.

This comes up again and again when I give talks on mistletoe – which I’ve been doing a lot recently – when I explain how slow-growing mistletoe is; the flower buds slowly developing in the year before, opening in February and, if pollinated, developing oh so slowly over 10-12 months to produce mature berries. By which time there are new flower buds ready for the new season. Berries may be a year old before they are fully ripe. Getting back to the bees I was pleased to see the Friends of the Earth ‘Christmas Bee Saver Kit’ yesterday – which they’ll send you in return for a donation. Why pleased? Because it features a picture of mistletoe complete with mistletoe flower buds, right next to a bee. It just seemed a nice touch.

Whether it is deliberate (with FoE knowing their mistletoe biology) or just an accident of a Christmas-themed design (with FoE just commissioning a seasonal design) I don’t know. But I like it either way.

[the flower buds are the central buds between the leaves]

Berries need birds – or people – too, to get their seeds planted. If you want to have a go try a mistletoe growing kit from the English Mistletoe Shop 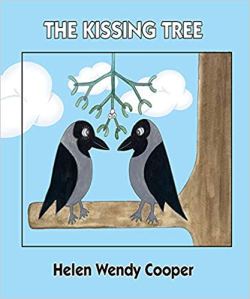 The story centres on Jack the Jackdaw who is searching for the perfect tree for mistletoe to grow on – but is thwarted by a Robin that eats all his mistletoe berries. An imaginative and educational book for children, showing how mistletoe needs a tree to grow on and that berries/seeds are spread by birds.  So far so good.

My only complaint, which mistletoe advocates may well have anticipated already, is that neither Jackdaws or Robins generally eat mistletoe berries!  Now if it had been “Mike the Mistle Thrush” being thwarted by a mischievous Blackcap that would have been fine.  And even appropriate, as Blackcaps ARE usurping Mistle Thrushes as distributors of mistletoe.  So there is a real life story that could be referenced here.

So, educational in telling how mistletoe grows on trees and is spread by birds, but, sadly, suggesting entirely the wrong birds.

[of course you don’t need a bird, you can plant the seeds yourself – find out how here or buy a Grow-Your-Own Kit here]

In previous years I’ve reported on the 6 mistletoe insects we have in Britain – and how we know very little about them. Indeed 2 of the 6 were only discovered here in the years since 2000 and the distribution and biology of all 6 are hardly known. But all are definitely tied to mistletoe, as they eat nothing else (except the Anthocoris bug, which eats the others).

The weevil lays its eggs inside mistletoe stems and the larva develops inside, only emerging as an adult weevil and leaving a distinctive exit hole. Affected shoots often show die-back of the terminal bud.  And that’s about all that is known about it. A simple life-cycle, no complications. Or none known.

However, a recent paper by Ian Thompson and Godfrey Blunt in Field Studies journal recording studies of invertebrate communities in Shropshire orchards makes an intriguing observation. The authors made a special effort to record mistletoe insects within the orchards they visited, including  collecting some mistletoe shoots with bud die-back to see if weevils emerged.   Some weevils did indeed emerge from some of the samples.  But from others a tiny parasitic wasp emerged instead of the weevil.  It was from a genus of wasps, Triaspis, that specialises in parasitising the eggs and larvae of beetles.

So we could have a new species and a new parasite – of an insect that eats a parasite.