Back in Dorset, revisiting some of the mistletoe sites from last year (see 2003 blog at www.mistletoe.org.uk). This time we’re in the Wimborne Minster area again, where there are several large parks that are known to, or thought to, have historic mistletoe populations. This is outside main UK mistletoe territory and these colonies were probably introduced by wealthy landowners in the 18th and 19th centuries, particularly on lime in lime avenues – a favourite host and habitat.

We pass Charborough Park – where I’m still unsure of mistletoe’s status – there were some records in the national survey of the 1990s but the park is entirely private and inaccessible – home of the interestingly-named Plunkett-Ernle-Erle-Drax family. Mistletoe is definitely within the area – there are sites at Sturminster Marshall and, adjoining Charborough Park, at Henbury House – see last year’s blog for these. We pass the Henbury colonies after Charborough, en route to today’s destination – Kingston Lacy House, former home of the Bankes family…

We know that mistletoe was present within the estate at Kingston Lacy in the late 19th century – as there are accounts (eg by Violet Bankes) of the gardeners harvesting mistletoe at Christmas – but is it still there??? Today’s mission is to investigate accessible parts of the grounds – and spot mistletoe. Of course we could just ask – but where’s the fun in that? And anyway all the staff seem pre-occupied preparing for their illuminated “Enchanted Garden” event later this evening. (This has been running since the 27th and goes on ‘til 31st – Hallow’een – an annual ritual, complete with fairies – sounds a bit a bit urgh! – though see below! The staff are all anxious about tonight as the last 2 nights have been a bit of a washout… and so they could be heading for a loss – but tonight looks brighter…)

Can’t resist a quick trip round the house, never been before, and rather startling – small, but perfectly formed 19th C remodeling of 17th C house, most remarkable for its many pictures – loadsa Lelys and Van Dykes, Titians galore. All due to William John Bankes, the proprietor in the early 19th C, who was eventually exiled abroad for homosexual behaviour but, as living in Venice, still able to send loadsa valuable artworks home. God knows what WJB would’ve made of fairies in the garden at night (probably best not to delve too much more on this line of thought…)

Anyways, there we are, turfed out of the house at closing time (17.30ish) and still to see the grounds, and maybe the mistletoe. Sun is low, sun is shining, so light is just right for spotting it and for photos. But, alas alack, we’re thwarted by the fairy lighting plans – half the garden and grounds are out of bounds due to the lighting set-up, including the promising sounding Lime Avenue!!. (Actually there are so many leaves left on the limes that unless there are massive mistletoe growths they might be difficult to spot, but it would be good to try..)

So we decide to come back later – illuminations start at 6.30 and then, we assume, the Lime Avenue will be accessible and illuminated – mistletoe-hunting by floodlight – a new experience! 45 minutes to kill, so off to Safeways in Wimborne for supplies. En route we spot a mistletoe growth over the main road, close to the estate but not in the walled area – but arguably within ‘the estate’ – so maybe this is remnant of the colony described by Violet Bankes? Dunno – this probably needs a letter to the head gardener or whatever.

Anyway, go back at 18.45 to find the place absolutely heaving with parents and kiddies – we dutifully join the slow procession up into the illuminated groves. We know what’s coming – as the lights were being warmed up earlier – white, red, green and blue – but the kiddiwinks seem in awe – ‘look mummy, blue lights’… ‘and now green ones’…. ‘yes dear, wait ‘til we get closer’. All v impressive – just could do with a few less people – should have come yesterday in the rain bah humbug… But at least the NT (for it is they – did I mention that earlier?) must be raking it in tonight. And the crowds haven’t reached the late opening shop or restaurant yet…

But we mustn’t forget the fairies – and the kiddies certainly don’t. The slow procession gets slower, magical musak is heard, and we realise we’re in fairyland – sort-of. Costumed girlies, some with flapping wings (controlled by hand movements –so a tad irregular) but all lit with a multitude of coloured diodes are dancing and prancing, the whole mysterious effect heightened by blacked-out faces (politically-incorrect memories of the B&W Minstrel Show pop-up briefly but are rapidly dismissed – we must concentrate on reaching the LIME AVENUE…)

But all is not as expected – yes the Avenue is illuminated but we’re not allowed along it…(B*ll**ks!!!!) We’re only allowed to look from each end – and blimin’ ‘ell there are some more of them fairies prancing about in it. Actually, this really is impressive, much better than that dancing. The illuminated avenue, and a pair each of tall and short fairies hiding and then emerging from the trees, really does seem a bit magical. It certainly fascinates the kids, so much so that I have to wait ages to take a long exposure picture – hand-held so it’s a bit shaky. But worth getting – how often does one come across an illuminated lime avenue with optional fairies? 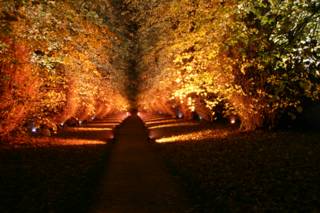