by: Jonathan BriggsPosted on: November 1, 2004
Methinks a pic would be better from the far end, where I know, from our earlier recce, there is an iron gate to rest the camera on. So onto more slow processions along the sides of the avenue, with interesting views of limes by night – with their distinctive basal suckering clearly shown.

Eventually reach our goal at the far end. But the gate is plastered with small kiddies, all imploring the fairies to come down their end for a change. Kiddies don’t move until fairies oblige, but eventually they do, and so kiddies depart and I can try another pic – more stable this time – note fairies – represented in long exposures as the glowing embers (see pic above – on the path at far end of avenue).

Onwards towards the promised hotdogs in the restaurant. Lots more trees and illuminations to see – and the show presents a whole new perspective on trees which a) are not usually lit from below – so can see aspects of trunks and branching in new light (geddit?) and b) not often lit in blues, violets and greens – which give v surreal effects. A lurid green cedar near the main house sums it up. 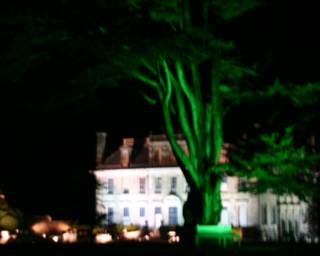 But no mistletoe – need to return when the leaves have fallen properly, and the fairies have retired for another year – might just do that in December… (or ring/write the estate manager – but that would be far too sensible)