Another mistletoeful day. Off to Tenbury Wells to meet up with Stanley Yapp, the well-known mistletoe-grower and harvester. We’re due to take part in a BBC TV interview, firstly in his orchards and later at the market, where mistletoe should be arriving for tomorrow’s auction.

I drive up early and call at the market first. Nick Champion is already inspecting the lots, and the place look full, despite the early hour. Not so much material as last week, but Nick isn’t expecting much more. I check he’s still ok for the BBC crew to visit later and then drive up to Stan’s place.

I’d not been to Stan’s before, and am impressed by the solitude – a gated road, and a tiny house. Plus lots of apple trees, mistletoe, sheep, and one bull. Stan and I chat about mistletoe matters, and I become aware we have an unspoken ‘rivalry’ for mistletoe media stories. I reckon Stan wins, especally with his supplying the Chinese Government once. I’ve got a few choice stories up my sleeeve, but these are embargoed for now – more next Christmas if these come off…

A few false starts as the others struggle to find the place but eventually we’re all assembled – Sarah Mukherjee (BBC Environment Correspondent), cameraman (Larry?), Alec Wall (local rep from the new Mistletoe Festival group), Matt Shardlow (entomologist from the Conservation group Buglife) plus me and Stan. 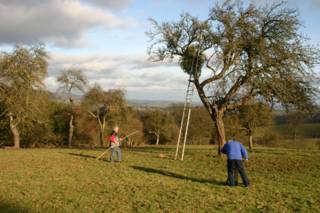