Then it’s off to Tenbury, and lunch, before visiting the market. This is much as I saw it this morning – not much new material, though some is still arriving, on the back of a variety of unlikely vehicles (including a 1974 Austin 1100 Vanden Plas – you don’t see many of those around these days).

Some filming at the market, which already has an air of sadness over it – as this could be the last one ever. Matt spends his time examining the lots for mistletoe insects – which slightly alarms some of the sellers as he picks the mistletoe up and shakes it vigorously. No harm done, only lose a few berries, and he is rewarded with one of the bugs, albeit dead already. See pics below. 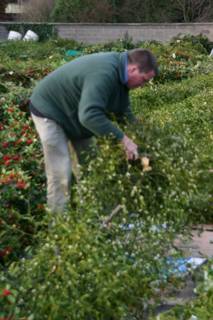 Matt shaking insects out of a mistletoe lot