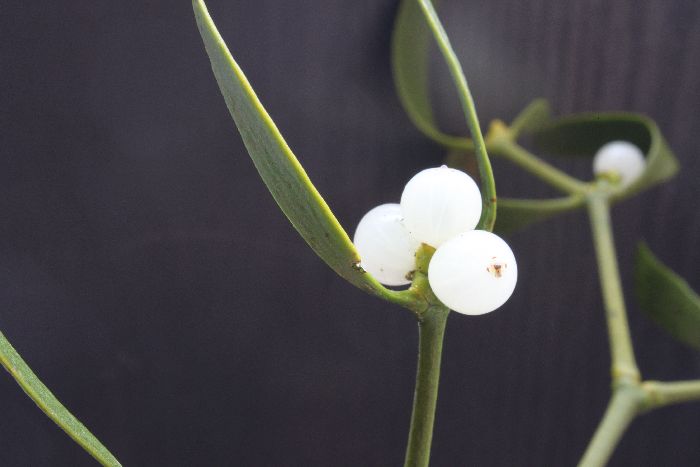 Mistletoe NEVER has berries between the leaves. Except in inaccurate Christmassy drawings by botanically illiterate artists. It’s a point I’ve made in this blog many times, as my regular reader knows well.

So what (see left) is this???!!! A botanical impossibility? Well, it’s certainly not the way it’s supposed to be – which is that there are flowers between the leaves, each developing into a berry over 9-12 months, by which time those leaves have fallen off and 2 new shoots either side of the flowers have grown up to make two new pairs of leaves above the berries. Like this (see right):

That’s the norm, and the way 99% of mistletoe (remember I’m talking about Viscum album, the mistletoe of northern Europe, not to be confused with other mistletoe species of differing branching habits) appears. The specimen shown above is therefore either some form of mutant growth or something has happened to suppress those shoot primordia that should have grown up either side of the berries.

The latter seems most likely – as this particular shoot is from a branch with several similar aberrations (see slideshow below), some of which do show partial development of those new shoots, often on one side only and in a reduced form. It seems something has affected the growth of the whole mistletoe branch, probably altering hormone distribution within the shoot apices and messing up the usual pattern of shoot and leaf formation.

Another possibility is the influence of the mistletoe weevil Ixapion variegatum as that develops, as a larva, within mistletoe stems just below the terminal buds and affects how the bud develops. But the usual result is to kill the bud, not just disable some parts of it, and there is no other evidence of weevil activity (there should be exit holes where the adult has emerged). So I don’t think I can blame this on the weevil.

But I must stop saying this is an impossible configuration…