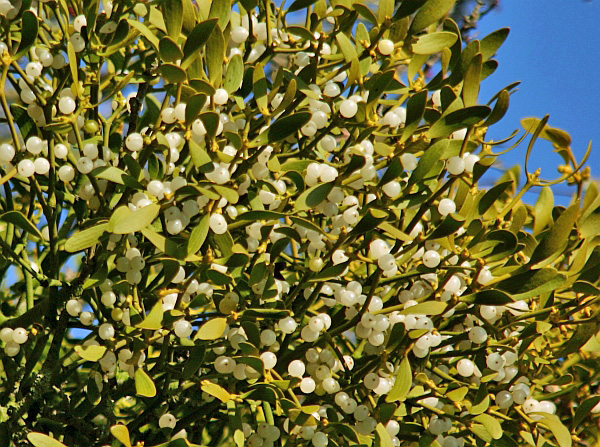 Loadsa berries on the mistletoe again this season.  Which make it about the 4th year in a row for a mega-berry crop.  The Christmas media will love this – the headlines about Berried Treasure (geddit?) will be almost inevitable.

As will the questions about why.

Always, every year, reporters  want to know why the berry crop is good (or bad, in some years).  They want to blame a lack of birds, too many birds, a hot summer, a dry summer, a cold spring, a warm winter. The state of the Euro.  Anything, doesn’t matter what it is – they just want a reason. But there isn’t a firm answer – and probably never will be – so they often just make something up.

When pressed, I usually point out that since the berries only arise from pollinated female flowers, it must have been a good year for pollination.  From which it follows that pollinating conditions must have been good in February, when mistletoe flowers open.  And yes, there were some wonderful sunny days last February, when the early flies and bees were out and busy on the mistletoe.  Sounds a reasonable argument to me.  All due to the conditions 9 months ago.

Except that it isn’t.  Those February flowers were formed, in bud form, in the previous summer, surviving the late summer, autumn and mid-winter as dormant terminal buds.  So, maybe it was a good previous summer for flower bud formation?   Which would make it all due to the conditions 18 months ago.  Which also sounds reasonable.

But why stop there?  Why not go back to the season before that when the shoots that grew during that summer were first forming?

All very confusing, and not what the everyday reporter wants to know.  So I usually stick with that last February angle – it’s convincing enough most of the time.

3 thoughts on “Another mistletoe bling year…”