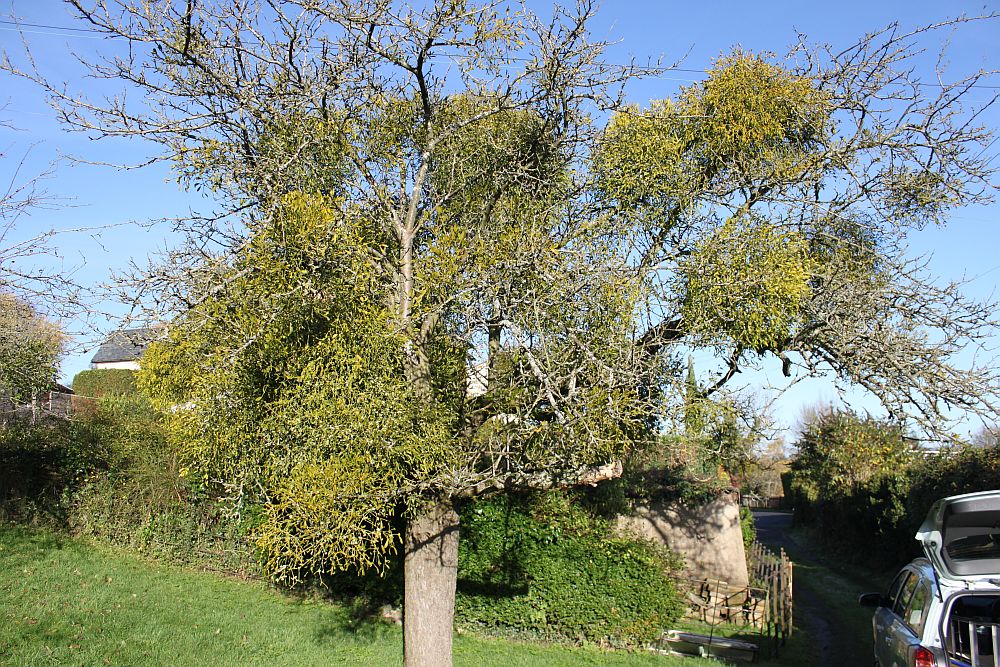 Spent much of the weekend battling mistletoe – some of the time up in trees, and some of the time going through the same stuff on the ground, twice.  I say battling, as that what it feels like sometimes – especially heavily infested trees that need management.  You end up with a cricked neck and hair and clothing full of mistletoe fragments.

The tree pictured is one in Woodchester, Gloucestershire, and is just one of several in a small 1930s apple orchard there that badly need mistletoe management.  This is the ‘before’ picture – and I forgot to take the ‘after’ one, so you’ll just have to take my word for it that is now looking much less top-heavy.  But definitely a battle – three hours here on Sunday reaching skyward with extending pruning poles trying to get mistletoe cleanly reduced but with tree remaining…

The on-the-ground phase for this site was largely to do with sorting definite waste from potential salesworthy mistletoe – and then, later, re-sorting the potential salesworthy stuff to get to the actually sales-worthy stuff.  Lots of berries, which is good, but mistletoe in these overgrown conditions often has a lot of surface algal growth, so some of this mistletoe isn’t as smart as it should be on closer inspection!

For more on mistletoe management visit the Mistletoe League website.