May Day! Summer will be here soon.  And mistletoe is doing fine, just keeping on growing.  My first picture here is, literally, mistletoe in May – a small mistletoe growth growing low on a May (Hawthorn) tree in full blossom.  Taken in late April actually – on the banks of the Severn near Framilode earlier this week.  Hawthorn/May is one of mistletoe’s favourite hosts, though the growths are often rather small and mis-formed compared to the spectacular mistletoes of larger trees (the one pictured is certainly rather deformed!).

And how does mistletoe behave in May (the month, not the tree)?  Is it ‘just growing’ as I suggested in my last blog entry  – or can more be said?  What sort of growth is it?

Well… with the current worrying about when Covid-19 lockdown might be relaxed and how the mysterious ‘R’ number has to be satisfactory beforehand I thought a brief comparison with mistletoe might be interesting.  The ‘R’ number is a factor in the rate of disease spread – and is just as relevant to mistletoe as it is to SARS-CoV-2 (the coronavirus that causes Covid-19).

Mistletoe, like SARS-CoV-2, can be considered a pathogen – in this case infecting a host plant – and so the R number concept applies perfectly.  Especially so for our mistletoe (Viscum album) as this mistletoe species does have a very distinctive growth and spread pattern mathematically – in theory at least.

Current media articles (e.g this from the Guardian) are making the point that if R is more than 1 the disease will continue to spread, and spread will be much faster the higher the value. If less than 1 it will decline. The R value is the number of people an infected person will pass the disease on to.  Current efforts seem to have changed R from 3 to about 0.7 in the UK in the last 6 weeks or so. 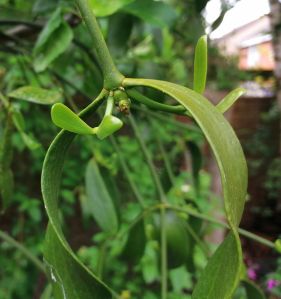 This has parallels with several aspects of mistletoe growth – though for mistletoe the factor is much more definable and fixed.  And it can be clearly seen now, in May.  Every branch from last year, tipped with a pair of leaves and small flowers (which opened – and closed – in Feb/March) is now producing two new shoots, each one tipped with a new pair of leaves and, between them, a small bud which will be next year’s flowers.  This picture (right) taken this morning shows this clearly.

Such a precise growth pattern is unusual and is one of things that makes our mistletoe, Viscum album, so special.

This is very definitely exponential growth – and it can (of course!) be represented by the formula

If you know your maths you’ll already be thinking that these numbers could get very large very quickly after a few more years – and you’d be right.  Think about, say, year 10 for example:

If the exponential formula y =1 x 2n is plotted as a graph you can see the full effect (formula simplified to y = 2n or, on the graphs below, to y = 2x):

And that number is extremely important if you think of mistletoe as a pathogen.  Each mistletoe leaf transpires water in a different, more reckless, way than the host tree’s leaves.  The more mistletoe leaves there are the more water-stressed the host becomes.  Doubling each year doubles that impact.  So it can matter quite a lot.  One of the key needs when managing excess mistletoe is simply to cut off the leaves – which, in theory at least, can reduce water stress very effectively.

But how real is all this – this is just a very simple mathematical model – albeit based on observed growth patterns. What happens in reality?  Is it better or worse?

Well it depends – on whether the mistletoe is managed, how high it is the tree and how wind-damaged it gets (branches break off very easily), whether it is cut for Christmas, whether it gets diseased (mistletoe gets diseases too) and whether leaves are grazed or damaged by birds or invertebrates.  So the number is likely to be less in reality.  (Except, of course, for the instances when a shoot produces 4 shoots and 4 pairs of leaves – but that’s another story…)

Still with me?  Good, there’s a little way to go yet….

So far this has been about one mistletoe plant – but the real virus comparison should be with mistletoe spread and new infections…  Either on other branches of the same tree or to adjoining trees.

And for this exactly the same maths applies – since spread is all to do with how many seeds mistletoe produces, and that relates to how many berries develop, which relates to how many flowers and so how many flower buds.  And the flower buds are between the pairs of leaves.  So it is absolutely the same maths – each pair of leaves has one set of flower buds.  And so each pair of leaves has a direct relationship with the number of berries and seeds produced.  The seeds are the mistletoe’s equivalent of the virus.  And, with 3 -5 flowers per bud and so 3-5 berries/seeds per bud, it is a lot of seeds.

So… the number of seeds, in this simple model, increase in the same ways as the leaf pairs.  Numbers way off the scale after only a decade or so.  Which would suggest mistletoe might spread very fast – with all those seeds.

Except that it doesn’t – it spreads very slowly.

Perhaps the model is even less like reality for the seeds?  There are certainly many extra factors to consider – some positive factors some negative.  On the positive side (more seeds) there is the factor of the overlooked flowers – it is a simplification to say flowers are only between the leaf pairs – there are usually many in the stem axils immediately below the leaf pairs too – so the model is under-estimating the potential of flowers/berries/seeds, possibly by quite a big factor.

On the negative side (fewer seeds, or fewer effective seeds) the first, most obvious issue is whether the flowers are pollinated or not –  if not then they won’t form berries and so won’t produce seeds.  And since they rely on insect pollination in February and March – which can be a challenge in cold years – pollination can be variable.

Another obvious factor is considering how many seeds, however perfectly produced, will ever get a chance to germinate on a tree branch – and this very much depends on how well they are spread by birds – and by which birds.  Mistletoe is not liked by most and even those which do eat the berries often only take them in small numbers if other berries are plentiful.  So the seeds may not get spread, or not spread efficiently.   See, for example, these berries, photographed (left) this morning, which are still attached to the parent plant – the seeds in these will never get a chance to grow now.

Nonetheless there is still a massive increase in berry production as a female mistletoe plant matures – and so the older the mistletoe is the more likely it is that there will be spread to adjoining branches or trees.  As regular mistletoe blog readers will know there are also some interesting changes in how mistletoe is spread, larger numbers of overwintering Blackcap birds meaning more efficient spread tree to tree.  Fascinating stuff – and difficult to quantify.

Meanwhile, if you’re growing mistletoe in your garden and are worried by any of the above don’t be (unless you have masses left unmanaged for decades!).  Small to medium mistletoe growths are not a problem and will only become one if left unmanaged, just like most other garden plants.  Look after your mistletoe and, once it’s 10 years old or so, prune it back now and then to adjust that ‘R’ number to a level that’s right for you.

Ten years ago, deep in the Borneo rainforest, a new species of bird was spotted feeding on berries from one of the local mistletoe species.  Small, grey but quite pretty it was given the name Spectacled Flowerpecker – but not, at the time, a formal scientific name because that needs formal examination and description – which means a bird in the hand, not in the bush.

The preliminary announcements about it in 2010 hailed it as a perfect example of how little we still know about the species of our planet and how diverse biodiversity actually is.

Fast-forward 10 years, to 2019, and this little bird still hadn’t been formally described and named.  Primarily because it is so small, just 2 inches tall, and is so difficult to spot, let alone capture.  It feeds largely in the forest canopy up amongst the mistletoe plants whose berries it eats – most sightings have been from the forest walkways erected in the canopy as a new form of ecotourism. Click here for a blog describing some 2017 sightings.  An account on the Audubon website describes the difficulties in documenting it.

This year, 2019, a specimen was finally caught, an incidental capture as part of a wider study with mist nets, and so it was properly documented and given a formal scientific name: Dicaeum dayakorum.  The specific part is in honour of the indigenous Dayak people who live in and help protect the bird’s native forests.  Here’s the header (click to enlarge) from the formal paper describing it – the full paper is at https://www.biotaxa.org/Zootaxa/article/view/zootaxa.4686.4.1 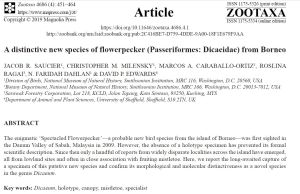 The genus Dicaeum, by the way, includes numerous other species of flowerpecker, many also feeding on mistletoes.  These include the Australian Mistletoe Bird Dicaeum hirundinaceum which featured in one of the BBC TV’s  David Attenborough natural history series some years ago. The broadcast clip showed a bird wiping the semi-digested mistletoe berry, complete with seed, from it’s er, bum, onto a branch. Very efficient. It’s not clear whether the Spectacled Flowerpecker is that good or whether it’s more of a hit’n’miss mistletoe spreader like our own Mistle Thrush (see various older mistletoe diary entries …). 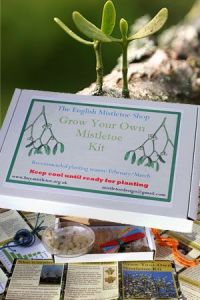 Mistletoe seed distribution – why leave it all to the birds?