By the mid-nineteenth century hanging mistletoe at Christmas was all the rage, featuring regularly in accounts of celebrations, particularly newspapers and magazine, often with pictures.  And of course there were paintings too, some by very famous painters – a favourite of mine is Bringing in the Mistletoe, a druid-themed painting by Edward Atkinson Hornel.  But that’s not the one I’m featuring today!

Most were of a much more domestic scenario than Hornel’s picture, and one of the best of these is Hanging the Mistletoe by Dante Gabriel Rossetti, painted in about 1860.  This is it (above left).

This is a really powerful painting, though simple too; a tight composition of a young lady hanging mistletoe and tying it with a red ribbon.  Colours are emphasised by a dark background silhouetting the mistletoe, with berried holly in the foreground and the auburn-haired young lady herself wearing floral sleeves on a sage-green dress.  It is a classic of Rossetti’s later style (late 1850s onwards) described, on the Wikipedia entry about him as “powerful close-up images of women in flat pictorial spaces characterised by dense colour. ”

The painting is generally dated to Christmas 1860 – and indeed this is written on the picture, just below Rossetti’s initial, though some sometimes suggest it might actually have been pointed later.  The picture also has other titles – sometimes described as Girl Tying Up Mistletoe and also as The Farmer’s Daughter. 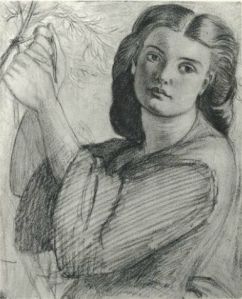 It was worked up by Rossetti from a chalk drawing – which has also survived (see left).  But this, curiously, is dated December 1868.  The explanation seems to be that this, the drawing, was given by Rossetti to his friend George Boyce, and that Rossetti added the date at the time of the gift, not when the drawing was made.

The date is important because it might help identify the woman in the picture.  Most accounts suggest it is his wife Elizabeth Siddal (1829 – 1862) who married him in May 1860.  She was red-haired and would, surely, be the model for this.  Here (right) is his picture of her at the time of their marriage.  The 1860 date fits and she was already a popular model – many will be more familiar with her as the woman floating in the water in the 1851 Ophelia by Sir John Everett Millais.

There are occasionally other suggestions for the mistletoe lady however – some commentators thinking that it may be Fanny Cornforth (see left) whom Rossetti had been painting from at least 1859 and with whom he had an affair, especially in the years after Elizabeth’s death in 1862. Perhaps the picture is later than 1860 after all?  Though in that case why would Rossetti sign it as 1860?

It also seems possible, if opening up both date and sitter to review, that it could be yet another auburn-haired model, Alexa Wilding (see right), whom Rossetti discovered in 1865.

But it is probably Elizabeth in the mistletoe picture.

For more about mistletoe visit the Mistletoe Pages website.

And if you do want to grow mistletoe why not try a Mistletoe Grow-Kit?  Available from the English Mistletoe Shop website at englishmistletoeshop.co.uk

Plenty of mistletoe mentions on ITV this morning – all within the 2 hour show Love Your Weekend with Alan Titchmarsh (on ITV Hub here).  Helped along a bit by Sir Cliff ‘Mistletoe and Wine‘ Richard being the main guest.

Christmas swag-making featured about 30 minutes in – with plenty of mistletoe incorporated into a very long decoration.  Some good mentions of how sticky the berries are, and their need for light when germinating, but then Mr Titchmarsh ruined the illusion that, for once, here was a TV Gardener who knew how to grow mistletoe, by stating, categorically, that berries had to be ‘rotten’ before the seeds would germinate.  Where on earth did he get that bit of nonsense from??  Berries have to be mature (which they will be in February/March, not now) but not rotten.   How would being rotten help?!  They germinate best when fresh and healthy.  Yet another TV Gardener getting it wrong (see many previous blogs over many years).  I really do despair.

All the more frustrating because I had helped make this programme – their Tree of the Week was Apple, using footage taken in an orchard session with me back in October, with Lesley Joseph’s voiceover referencing the link between apple trees and mistletoe (49 minutes in if you watch it) and then a session with me talking about mistletoe, in that same Gloucestershire orchard, at 76 minutes* in. Nice little bit of film, didn’t realise my hair was getting so grey though!

And, towards the end (about 105 minutes in) another nod to apple trees and Gloucestershire orchards when Alan and Sir Cliff sample some liqueurs, including an Eau de Vie made from apples grown in a heritage varieties orchard in Gloucestershire.

Apples trees, orchards and mistletoe – what’s not to like?  Just incorrect (as usual) TV Gardener advice!

(*timings are all from the 2 hour programme as broadcast.  If you’re watching on ITV Hub it’s 30 minutes shorter (fewer ads) so my bit is at about 59 minutes in.  If watching ad-free on ITV Plus it will, I assume, be even earlier.)

And, Alan, if you’re reading this, if you do want to grow mistletoe why not learn how using a Mistletoe Grow-Kit?  Available from the English Mistletoe Shop website at englishmistletoeshop.co.uk 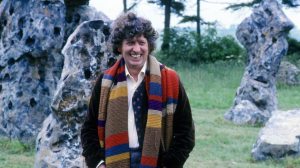 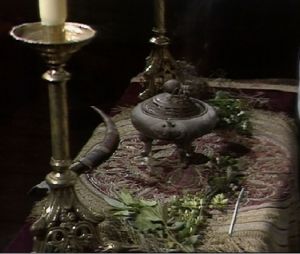