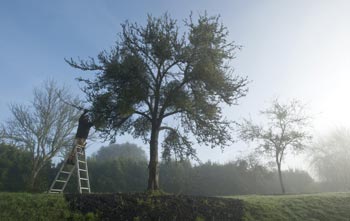 Mistletoe really is (and probably always has been) very scarce in Cornwall, so the thriving population at Cotehele,a National Trust property just on the Cornish side of the Tamar is particularly interesting.  I’m not sure how it got there – it could be a remnant population of mistletoe from the long lost Tamar apple orchards, or it could be a deliberate introduction by a gardener.  There have been recent hints that it’s the latter.

(Edit 22nd Dec – well, the footage was shown, but you wouldn’t have guessed it was Cornwall, as they had linked it to a Worcestershire-based story mentioning Tenbury Wells – which is a bit of shame, as Tenbury (yawn… ) gets all the mistletoe credit each year and has already featured on TV repeatedly this season (and indeed every season).  It would have been far more interesting to stress the Cornwall angle, rather than covering it up.  But that’s TV for you – ever so slightly annoying, and often missing the finer issues! The full Countrywise Christmas prog, which IS stressing it’s all in Cornwall, is being broadcast on Friday 24th – but it won’t have the mistletoe orchard bits).

So, if you want to catch Cornish mistletoe on TV (that means you Leonore Newson!) watch ITV1 at 1900 on Wednesday 22nd.  If you miss it it’ll be watchable afterwards at http://www.itv.com/lifestyle/countrywise/

And, if you’ve not already had a look, watch this National Trust video about Cotehele Mistletoe too.