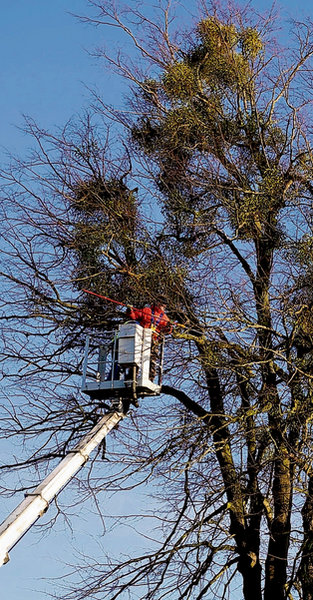 Dublin’s mistletoe is thriving, spreading faster than it used to, but much of it is rather too high to harvest conventionally.  Today’s Irish Times reports on the recent cull/harvest at Glasnevin Botanic Gardens, where the plant has been spreading slowly amongst a variety of host trees since being introduced in the 19th century.

Until recently the spread has been slow, which is normal for mistletoe outside its usual range.  But in the last few years it seems to have started moving from tree to tree more rapidly – for reasons that aren’t clear.  Similar increased spread has been noted in other isolated mistletoe populations  recently too (incl Hampshire, Essex, Surrey and Cambridge) – there’s a summary of all of this in my recent review in British Wildlife (23:1 Oct 2011; 23-31) where possible causes – climate change, changes in bird vectors (e.g. overwintering Blackcaps) are discussed.

In Glasnevin, Dublin, they’re taking the opportunity to manage some of the excess, which can ultimately damage or even kill the host tree if left alone.   And they’re auctioning off the arisings  for Christmas decorations, with proceeds going to charity. But, as the picture shows, they’ve got to go up rather high to reach some of it.

This is, overall, a really good example of integrated mistletoe management – and is something we need to see more of for mistletoe on fruit trees in the mistletoe heartlands of Worcestershire, Herefordshire, Gloucestershire and Somerset.

But not every landowner can be as organised as a Botanic Garden – many manage their mistletoe rather more randomly, if at all.  If you own land with mistletoe on fruit trees the Mistletoe League Project would like to hear how you do, or don’t, manage it.  Go to www.british.mistletoe.org.uk to take part.

One thought on “Extreme harvesting in Ireland”