It may be a summery day today, but it is the last day of September, and with October (tomorrow) the new mistletoe season will begin.  Well, when I say begin, I really mean underway – various mistletoe-related activities kick-in, in preparation for the proper season in November/December.

Press coverage has started  already, with a piece in the Worcester News talking about this year’s Mistletoe festival at Tenbury Wells .  And the Tenbury Wells Festival website has just been overhauled and updated – have a look.

That Worcester News  article came as a bit of a surprise, partly because of the early date and partly the long quote from me  – but I’m pleased it’s majoring on the evils of plastic mistletoe and the popularity of proper  fresh mistletoe.  If you’re wondering about the references to exports around the world, those are based on my experiences of trading with TEME mistletoe – who often sent Tenbury mistletoe to Canada and the US from 2005 to 2009.  A bit of a problem keeping it fresh, but it usually seemed to arrive ok.

The South Africa reference is actually to a story about Charles Johnson, a north Gloucestershire man who exported local mistletoe in the 1930s .  His harvesting methods were rather unusual, based on small boys who “creep stealthily into orchards after dark” – here’s a detail from an article about him, and his, ahem, stolen, harvest,  in Picture Post, December 1938: 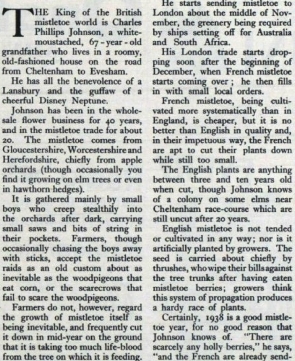