A few media reports today (Telegraph here, Science2.0 here) of yet more new species discoveries – there seem to have been a lot recently.  This time the reports are about some results from Kew expedition around the world.  And, unusually, there’s a mistletoe! 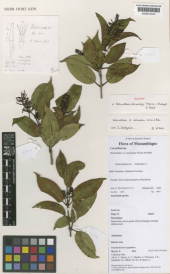 Now, don’t get too excited – there are already 1300+ mistletoes around the world, so another one isn’t a surprise, but it is a rather satisfying story as the official version implies it was first spotted by an entomologist – not a botanist.  Here’s part of the description from Kew’s formal page on the species:

This parasitic plant is one of the tropical mistletoes or loranths. It was recently discovered near the summit of Mt Mabu in northern Mozambique during a Kew-led expedition to investigate the biodiversity and conservation requirements of a range of mountains in this part of south-eastern Africa. Helixanthera schizocalyx is found on stunted trees such as Psychotria zombamontana(Rubiaceae – coffee family) at the upper edge of wet montane forests where broad granite peaks break through. So far it is known from just five collections, all in the same small area. It was first noticed by Colin Congdon, a renowned East African butterfly specialist, who realised it was different from anything he had seen on mountains in Malawi and Tanzania. Lepidopterists pay particular attention to members of the Loranthaceae family as many species are specific hosts for a group of interesting butterflies.

This point about looking out for mistletoes because of their value for invertebrates is very topical, and it applies just as easily to our mistletoe, Viscum album.

We currently have 6 specialist insects on our species – 1 beetle, 4 bugs and a moth – but all are considered valuable in conservation terms  and, increasingly,  get as much attention and biodiversity action than mistletoe itself!  Two were discovered as new species to Britain in the last 10 years, and the moth (the Mistletoe Marble Moth) has been designated a Priority Species in the UK Biodiversity Action Plan.  Mistletoe insects enjoy a lot of attention, and they probably have a key and critical role in wider mistletoe conservation.

More on this story in this Kew news announcment.