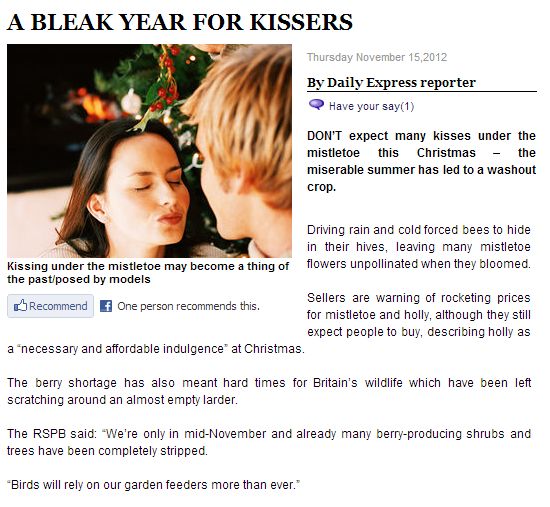 On Facebook yesterday I suggested the utterly made-up  ‘shortage of mistletoe because of cold wet weather’ story would appear in the Mail next. I was wrong.  It’s in the Express…  And they’ve already morphed it into something even worse – apparently “Kissing under the mistletoe may become a thing of the past” and “Driving rain and cold forced bees to hide in their hives, leaving many mistletoe flowers unpollinated when they bloomed”

All of which is untrue of course.  As I pointed out yesterday mistletoe flowers in Feb/March when the weather was just fine, and the berry crop this year is good too.

Where do these false stories come from?  Both the Telegraph (yesterday) and the Express today mention RSPB and quote them as saying a the cold summer led to a general berry shortage and that, in turn, has led to food shortages for birds, so that the fewer berries are stripped more quickly.  But no name is attributed to the RSPB story, and RSPB’s media office has not issued a press release about this, as far as I can tell.

It looks as if someone from RSPB is briefing journalists on a generic berry problem, and then the journalists may be incorrectly projecting that generic berry problem to mistletoe. I do hope it’s not the RSPB who are making the incorrect link to mistletoe – as they should surely know better – i.e. that mistletoe flowers in late winter and is unaffected by summer weather plus, critically, that mistletoe berries are eaten by very few birds and usually survive on the plant well beyond Christmas – indeed they are only ripe, and most appealing to birds in early spring, so won’t be being eaten in quantity now. The RSPB would know all that, wouldn’t they?

Update 11.15 am:  Yes the RSPB do know all that!  Have been in contact with them and they confirm it wasn’t them who mentioned mistletoe.  They have issued a media story about berries though. That general berries story does talk about shortages, but not for mistletoe – you can read it here.  So, the blame for the mistletoe story lies squarely with the newspapers – specifically (so far, I’m sure there’ll be more) Lucy Kinder at the Telegraph and an anonymous ‘reporter’ (perhaps another word would be better, suggestions welcome) at the Express.