A big day for the Tenbury Wells Mistletoe Festival – we had the arrival of the Mistletoe Queen in a pony and trap, the opening of the Festival by Emmerdale stars Lorraine Chase and Chris Chittel in the morning and the mistletoe workshop with druids in the afternoon. 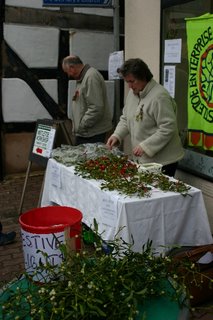 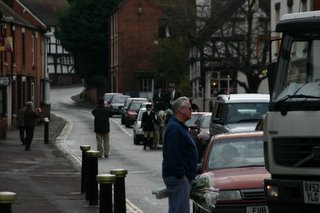 The Queen’s transport (centre of pic) is stuck in traffic… 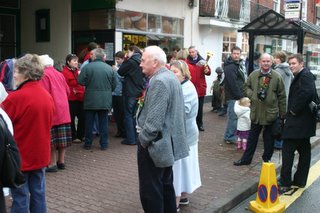 Waiting – for the Mistletoe Queen, and the Emmerdale lot (they’re both late….) 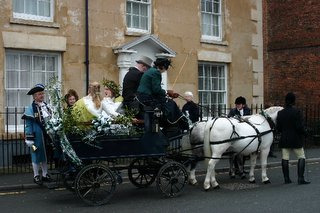 Through the traffic – but a pause to ensure synchronisation with Emmerdale…(the ponies and trap were just right – a great credit to all involved – esp Paddy Marris (in the black hat) – who owns both trap and ponies). 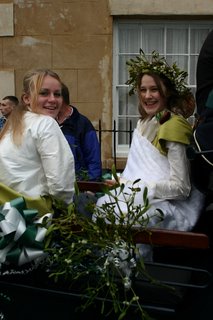 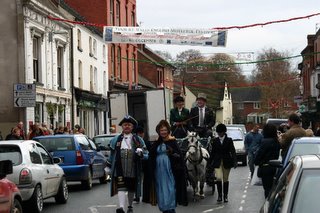 Nearly there – passing under the Mistletoe Festival banner. 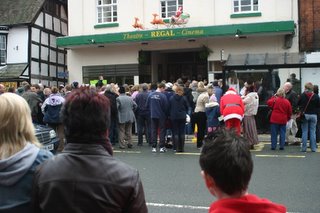 The waiting crowd – split across the road. 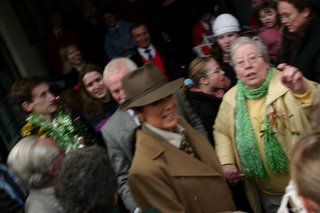 Chaos as soon as Chris Chittel and
Lorraine Chase appear (known to Emmerdale fans as Eric Pollard and Steph Stokes). Jen Green (green scarf) tries to control the crowd. Don’t know what the chap covered in tinsel is doing… 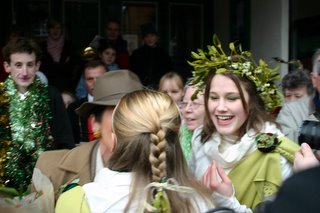 Kisses (and autographs) all round – here’s Lorraine giving the Queen’s attendent a quick peck – much to Queenie’s amusement. Still not sure what the tinsel-covered bloke thinks he’s doing. 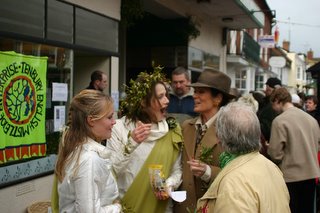 Time for a packet of local Tyrrell’s crisps once the crowd has started to disperse.. Even Queens eat crisps. 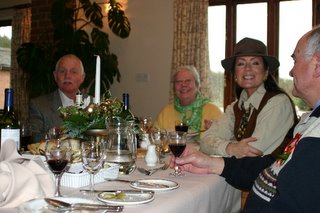 Lunch at last – away from the crowds. Time for a quick chat with Lorraine about mistletoe – and her old beau Johnny Knight who helped set up the national mistletoe survey with me back in 93/94. Johnny has since died and Lorraine suggested perhaps a memorial trophy to be associated wth the Festival – come back next year for an update on this!
No pics of the Mistletoe Workshop – sorry – was too busy running it. But I thought it wnet quite well – apols to attendees for the late start – and hope we didn’t lose too many of you. The Druids gave a very impressive musical show, following a thought-provoking video of Swiss mistletoe harvesting… (you had to be there).
Mistletoe Adventures, beginning with Christmas 2005 but extending well into 2006…