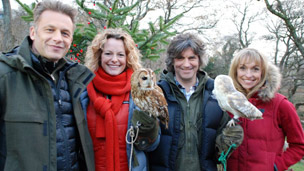 Have just been viewing the BBC Springwatch Christmas Special (broadcast yesterday and on iplayer here – mistletoe is from 1.16mins to 1.20mins) to see what they said about mistletoe.  I had been expecting something about Mistle Thrushes, as Kate Humble had tweeted that she was off to film Mistle Thrushes on mistletoe a few weeks ago.

So, were Mistle Thrushes featured?   Well no, not really, apart from some pretty shots and a verbal description of what they do – which was slightly disappointing.  I’d expected at least some footage of thrushes eating mistletoe (easy in the right place – we saw this two days ago in Dorset and mistletoe’s scarce there), and I’d really been hoping for footage of the excreted strings of mistletoe seeds – but no, nothing like that at all.

So, what did they actually cover?  A good, but rather generic, account of mistletoe in orchards – almost word for word the sort of pieces I’ve been involved in for tv countryside programmes over 10 years plus – the mistletoe-laden apple orchard, the presenter (KH) saying ‘gosh, I’ve never seen so much’ or words to that effect, the interviewee explaining that it’s a parasite and a mixed blessing for the tree, plus passing references to the 6 mistletoe insects and the obligatory comment that ‘not all birds recognise the white berries as food’.  A good interview though, despite it being, from a mistletoe point of view, rather over-rehearsed in innumerable preceding programmes.  Interviewee was the very confident and plausible Neil McDonald of the Orchard Pig cider company in Somerset.  Good work Neil (though I think I have copyright on that phrase about the white berries!)

But not so good Springwatch.  Surely they could have spruced this up with something more original?  They mentioned Blackcaps as berry vectors – but totally overlooked the fact that, for British mistletoe at least, these overwintering berry spreaders are new – with massively increased overwintering Blackcap populations in recent decades – which may be affecting mistletoe spread.  Not to mention the really exciting point that these overwintering birds are a genetic  sub-race of the species.  Both of those angles are really interesting, cutting edge stuff and incredibly topical and newsworthy.   But maybe Springwatch doesn’t do topical and cutting edge, at least not for the Chrimbo special.

Another mega-point they missed was the management issue – only mentioning that mistletoe could take over the trees is one thing, but how about reference to the burgeoning and emerging need for better orchard (and garden) mistletoe management – and the fact that if it’s not improved we might lose much of the accessible crop (other than in niche, managed orchards), and the tradition of harvesting etc.  Surely that could have been mentioned at least – it is the most important issue for mistletoe (and associated wildlife) in orchards (though not in wider countryside!!) at present.  Plus (of course) in omitting this they also failed to cover the new Mistletoe League Project – aiming to document mistletoe management in orchards and ultimately encourage better mistletoe husbandry.

2 thoughts on “Mistletoe on SpringWatch – not bad but could do better!”