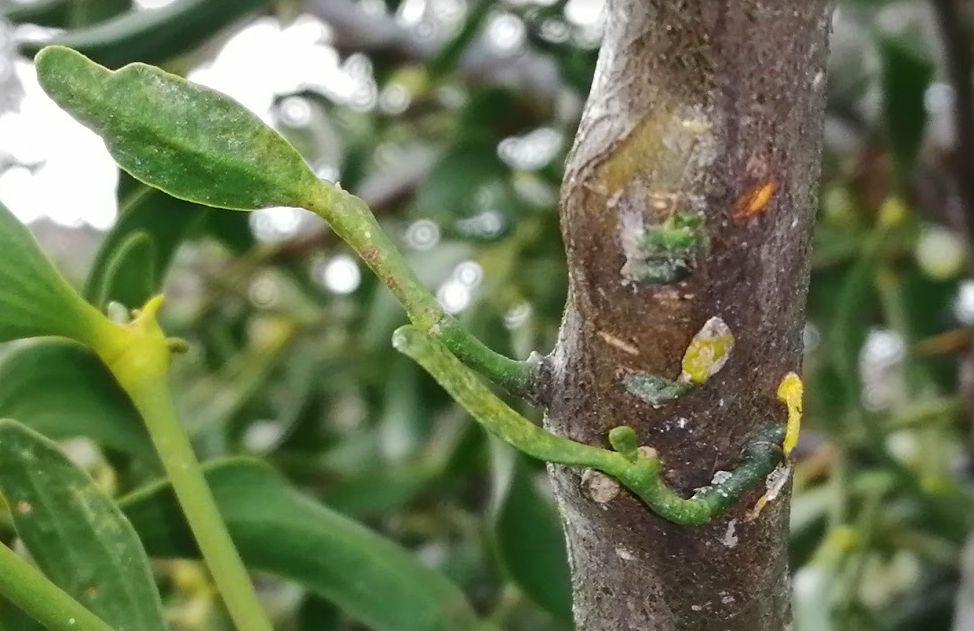 A morning of mistletoe seed and seedling spotting around our garden – which already has (not surprisingly) multiple mistletoe plants, established over the last 20+ years.  There’s a mixture now of deliberate (man-made) and natural (bird-sown) plantings.  Many many more of the latter than you would normally expect as this garden has, when we used to trade mistletoe, been the storage space for much mistletoe cut from elsewhere, so has spawned many more new plants than it should have done!  Most of the new seedlings these days are bird-sown plantings, though I do still experiment with a few deliberate ones on new hosts (as do the birds, though I doubt they’re genuinely experimenting).

This winter we’ve had, as usual, blackcaps visiting regularly, feeding on (and probably visiting largely because of) the berries on the established mistletoe plants.  These birds are satisfying and annoying in equal measure.  Satisfying because blackcaps are such excellent mistletoe feeders, taking one berry at a time and then fidgeting it round in their beak so that they separate the seed from the pulp, then fly off, only a few metres, to wipe the seed off on a branch, often the same branch each time. But also annoying because they can, after a few weeks, consume all the berries from one plant – rendering that particular one less attractive and, also, meaning I can’t use those particular berries myself.  The blackcaps seem to always prefer live mistletoe, despite there being several bunches of cut mistletoe, brought in from pruning operations elsewhere, that they could eat. It seems the cut mistletoe has an inbuilt ‘best-before’ date that only the birds can see (it looks fine to me).

So already this winter we have a lot fewer berries on the plants but lots of blackcap-sown seeds – all over the place, on good hosts like hawthorn and apple but also on unlikely hosts such as beech, dogwood, and even fir.  But the birds aren’t trying to grow it, they’re just trying to get rid of the sticky seeds, so for them the unlikely hosts are just as suitable as good hosts.

Recent plantings – in the last two seasons – of my own include Chaenomeles (Japanese Quince), Cotoneaster horizontalis and, a really wild card, Coronilla. The Coronilla, a shrubby member of the pea family, seemed a possible contender as its close cousins Robinia and Wisteria are known to be surprisingly good hosts (we have a lot on the Robinia in this garden).

This season there are mixed results on these three trials – there’s establishment but slow growth on both the Chaenomeles and the Cotoneaster, with seedlings now two years old but showing very little development yet.  And the Coronilla, despite looking good, with mistletoe seedling survival last year, has died – by which I mean the whole shrub has died.  Perhaps I should have expected that –  Coronilla has reputation as being short-lived, often only 5 years or so, so perhaps my mistletoe ambitions for it were unrealistic, mistletoe needs its host to live for decades!

Want your own mistletoe? Grow your own with a Mistletoe Grow-Kit from the English Mistletoe Shop.