Mistletoe seeds are peculiar. As, of course, is much of the rest of mistletoe’s biology. But the seeds are rarely talked about, and I thought I it was about time I wrote some notes on them here, not least as this is the time of year many people decide they want to grow their own.

I’m talking largely about European Mistletoe, Viscum album, though some of the following may well apply to other species too. And the main point I want to cover is light.

At this time of year the berries, each of which contains just one large seed, have become translucent – a sort of pearly-white. And the seed, encased inside the mucilage in the centre of the berry, is receiving light. If you squeeze the seed out, wipe off that sticky jelly and examine it, you’ll see it is bright green. It looks as if it is photosynthesising.  Already.  And it has not even germinated yet.

Now, mistletoe germination works best in the February-March-April period. So these seeds, sitting inside their little pearlescent globes, may be actively using light for another three months yet. It’s as if they each have their own private spherical greenhouse to live in through the winter months.

This implies an actual need for light – and there are, if you look through the scientific literature, several accounts that stress how the seeds need light, and how just a few weeks of darkness will kill them. This is something I’ve been aware of for years, and is an argument I used, when developing the mistletoe grow-kits for the old Tenbury Mistletoe Enterprise in 2004/5, for not keeping excess berries cut before Christmas. This seemed wasteful – but necessary. Instead we would have to always use fresh berries cut from live mistletoe in February/March – which is what we did (and still do for the EMS Grow Kits).

Seed-banks, such as those at Kew, don’t try to store mistletoe berries/seeds for the same reason – because they have very limited longevity. They will not live if stored.

But how much darkness is a problem? And how long will berries, or seeds taken out of berries, survive? Well, as a rule of thumb I’ve tended to assume only about two weeks if in the dark, though obviously much longer if in light.

We stress this in the Grow Kits we sell through the English Mistletoe Shop – suggesting the postal box is opened soon after arrival and that the clear dish of berries is kept in a light place until planted. And, for those who want to keep their own berries from Christmas mistletoe to plant in spring, I always advise somewhere cold, like a shed, but that it must also be light, like a shed window. Or even just leave the mistletoe sprig outside.

The comments above are about the berries and seeds – but what about germination? Again, you just have to look at a mistletoe seedling to realise that it is actively photosynthetic – the tiny hypocotyls that emerge from the seeds are bright green. So these need light too. Indeed, as independent plants (they are not parasitic until they have linked into the host’s vascular system) these seedlings need every resource they can get – and light is fundamental.

This instantly shows up how misguided some of the old mistletoe gardening lore is – which is often a recycled Chinese Whisper about cutting nicks in bark and inserting the seeds, as if planting them inside the tree. That’s a sure-fire way of killing the seed/seedling, as it is placing them in the dark.

No wonder such accounts often say that it is difficult to grow successfully. They’ve just advocated a method that almost guarantees the death of the seed. It’s definitely very difficult to succeed if you choose that method.

Last spring I experimented, in a fairly basic way, with germinating seeds kept in differing periods of darkness, to see how they fared. I needed the germinating seeds to be portable – so couldn’t use actual trees. But as mistletoe seeds will happily germinate on anything (they don’t know what is or isn’t a tree until they fail to find any host tissue to connect to!) I used a large number of petri dishes, each with about 20 seeds, 10 stuck to the top half, 10 in the bottom half.

The seeds were brought out of darkness in batches over six weeks – and results were fairly convincing: The seeds brought out in weeks 0, 1 and 2 germinated readily, but those left in darkness until weeks 3, 4, 5 and 6 mostly failed to germinate at all.

All were kept for the rest of the summer (germinating seeds can survive some months without a host as long as they are sprayed with water occasionally) and there was no major change – the seeds exposed to 2+ weeks of darkness simply did not grow.

I will be repeating the experiment, with some refinements, next year. In the meantime, here are some close-ups of the successfully germinating seeds – in all their weird mistletoe glory. Many are polyembryonic – so where you see 2, or even 3, shoots from one seed you are seeing twins, or triplets, emerging. I think I did say they were peculiar?

Want to try growing your own mistletoe? 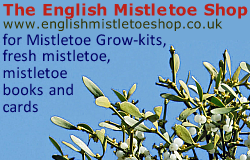