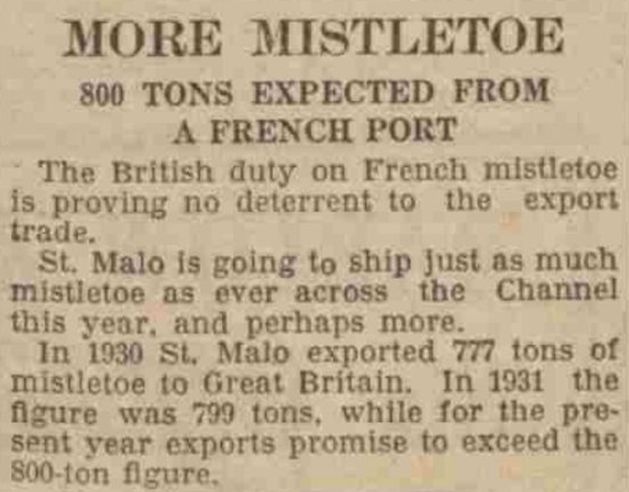 Many of my mistletoe talks this season have had a history theme, looking back at mistletoe in days gone by – both ancient (myth, legend etc) and modern, describing how Christmas demand for mistletoe from the 19th century onwards made it a saleable product, not just a curious tree parasite.

The trade in mistletoe grew and grew – built on the growing popularity of the kissing custom in the Victorian era and a desire, requirement even, for every home to have some mistletoe at Christmas.  This demand led to a massive trade in harvested mistletoe, mostly from apple orchards where it is easily cut.  And most of those orchards were, some still are, in the south west midlands of England and, of course, abroad in France where mistletoe grows abundantly.

Stories of this trade are fascinating – it was very significant, with huge amounts being shipped by train around the country, across the channel from France and even, before the advent of air travel, shipped from Britain out to Australia, South Africa etc.  The ‘colonies’ wanted proper mistletoe, even if it was a few weeks in transit and a bit shrivelled on arrival.

These days the quantities traded are much smaller – though most is still cut from apple trees in SW English midland and French orchards.  Firm trade figures are almost impossible to obtain as so much is traded informally now – there are no tonnages for ships or railways, it’s just cut and freighted in lorries, vans and trailers with no documentation required.  The only regular source for trade figures is Tenbury Mistletoe Auction, but even this only give a small snapshot of the overall trade as only a fraction of the trade, and certainly none of the imported mistletoe (which is probably the majority), passes though here.  So, data from here shouldn’t be used in scientific analyses of the trade (you know what I’m talking about Jeff!).

But if there are no overall trade figures how can I say quantities have decreased? Well, technically I can’t, obviously.  But several factors suggest major change – not least the amount available to harvest is much less as there are far fewer suitable orchards here or abroad.  Another major factor is the much more laidback approach to kissing we have these days – mistletoe is no longer needed by many people for a quick smooch with a stranger!  And then there’s plastic mistletoe – a trend that’s grown alongside artificial Christmas Trees – why worry about buying the real thing when you can use the plastic imitation you hang every year, kept in the loft the rest of the time with the lights and baubles?

Stats are very hard to come by though – the National Trust recently announced that in a survey of 240 members, when asked what Christmas traditions they no longer took part in, 31% said they no longer hang mistletoe. A small sample but, if it is reflecting the wider population, that’s a third not using mistletoe at all.  And it’s not clear whether the other two-thirds use the real thing or plastic.

But that’s only a small sample, and just one survey.  I recall a survey back in 2007, apparently of 3000 people, which said 9% actually pick their own mistletoe – which sounds great and suggests a thriving tradition until you realise that most of Britain has hardly any mistletoe to pick, so it’s very unlikely 9% of people even have an opportunity to pick their own. There must have been something wrong with the wording of the question, or the interpreting of the results – unless all the respondents lived in the south-west midlands.  Statistics need to be treated with some caution!

And, talking of stats to be treated with caution here are the stats, so far, for the Tenbury Auctions this year, with corresponding stats from the same week in 2017 and 2018.  The most recent auction was yesterday but stats for that aren’t available yet.

Make of that what you will – I would caution against any serious analysis – these are just indicators of prices at one venue.  The good stuff (1st quality) is the material with good ripe white berries and deep green leaves, the other (2nd quality) had, mostly, just as many berries but in that week some were underripe and not fully white and some had the leggy-ness or the yellower leaves that always reduce the value. The only major difference to last year’s mistletoe is, from appearances, slightly smaller berries overall and perhaps slightly later ripening (arguably causing those smaller berries).

The best way to ensure a good supply each year is to grow your own!
For Mistletoe Grow-Kits, Books and Cards  visit the English Mistletoe Shop website at englishmistletoeshop.co.uk