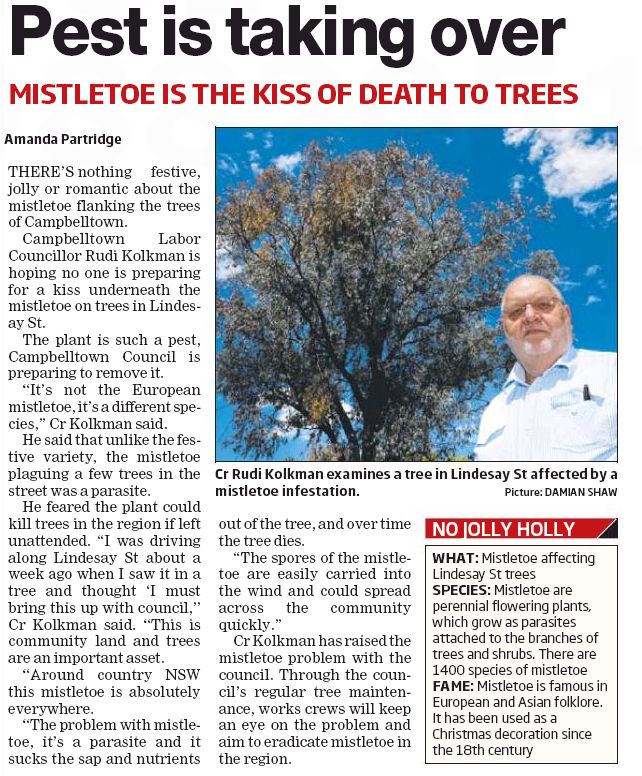 Yesterday’s blog about giant mistletoes featured the amazing Western Australian Christmas Tree – a mistletoe that grows in the ground by parasitising the host’s roots, not the branches.

The story is from Macarthur Chronicle, a newspaper in Campbelltown, which is a town in New South Wales, just south-west of Sydney. In their 19th Nov issue, they reported that Councillor Rudi Kolkman was highlighting a problem (in his opinion) with local mistletoe infestation. He was suggesting control is needed – which is, in itself, fair enough if indeed there is excess mistletoe. Many mistletoe species can become a problem and some Australian mistletoes have form for this (for example see the story I covered here in December 2012, though do note that this emphasises mistletoe’s positive side too)

So what was the mistletoe misinformation? Well, clearly Councillor Kolkman doesn’t know much about plants! He suggested the parasitic nature of the local mistletoe makes it unlike the festive variety (when actually it makes it exactly like it!). And then goes on to claim that it is spread by ‘spores’ that are ‘carried on the wind’ and so could infect the whole neighbourhood very quickly. But, most mistletoe seeds (not spores, mistletoe is a highly evolved higher plant and most definitely grows from seeds!) are spread by birds. Which means spread can be to the whole neighbourhood, but it will be one seed at a time and therefore won’t be rapid. Australia even has a special Mistletoe Bird. What does he think this does with mistletoe? Kiss under it?

But, to be fair to Councillor Kolkman, he may be right that local mistletoe needs control (though probably only in urban areas, not in the wider environment where it will be an important part of the ecosystem). But he doesn’t help his case with scaremongering lines about wind-blown spores! 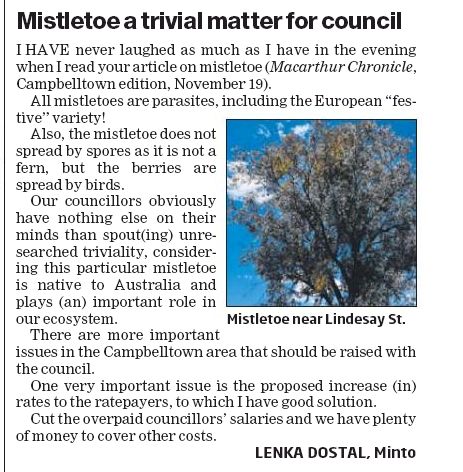 In the 26th Nov issue of the newspaper there is a letter responding to his concerns. The letter writer, Lenka Dostal, says “I have never laughed as much as I have in the evening when I read your article on mistletoe” before going on to describe Kolkman’s errors.

I’m not quite sure why Lenka thinks it was quite so funny (unless everything else is incredibly serious in Campbelltown). But maybe this is one of those over the top responses that just reflect the Australian way? After all Aussies do have a bit of a reputation, certainly here in the UK, for being outspoken…

Which reminds me about, er, cricket
Digressing briefly to cricket, that outspoken tendency has been rather obvious in the recent Aussie comments on the current Ashes series where the Aussies have been ‘sledging’ members of the England team. One of the recipients, Jonathan Trott, has just been signed off with stress though that may, of course, be nothing to do with the sledging…

But it can’t have helped. And we Jonathans have to stick together*!! So I have a mistletoe-themed proposal to help sort the whole sledging problem once and for all.

The next stage of the series, the 2nd Test, will start at Adelaide on 5th December. And what’s Adelaide famous for? Mistletoe! Well, it should be famous for it. There was last year’s announcement from the University of Adelaide about their research on mistletoe in cancer therapy – but that was using European mistletoe extracts and that’s not what I’m thinking of. In mistletoe circles the area is best-known for its mistletoe conservation/management work – particularly with Box Mistletoe (Amyema miquelii). They even have a Mistletoe Action Group in the Clare and Gilbert Valleys area. Don’t believe me? Read this.

So… before the 2nd Test why don’t the Australian and England teams just go local, get in with the Adelaide Mistletoe Action Group, find some Box Mistletoe (an oddly apt name for a mistletoe in cricket…!) and just kiss and make up for the Christmas season? (or maybe just a group-hug?)

Maybe I’ll drop a line to Aggers (another Jonathan) to see what he thinks.

*Except for, obviously, the bounder Aitken.