Trying out my new ‘Musical Mistletoe’ today. Bought on Ebay, where it’s being sold by various sellers – some describing it as wonderful, others warning you only to buy it for your worst enemy.

Having tried it, I concur with the worst enemy camp – it is truly awful, and probably the worst taste mistletoe items I’ve ever seen (and that’s saying something…) . Basically it’s a bunch of plastic mistletoe (modelled on the American species as usual – but that’s another story), that is strung with small red LEDs, a movement sensor and 3 awfully tinny Christmas tunes. Actually Christmas out-of-tunes would be more accurate as the noise is incredible, and there doesn’t seem to be a volume control…

The box says it would be good for parties – and maybe it would, but I think we’ll leave it switched off in the house. The product is a British invention – which hit the headlines a couple of years back but it seems to have never caught on – I wonder why?…. 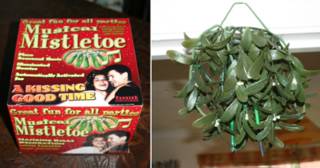