by: Jonathan BriggsPosted on: November 7, 2004
Out into the garden to check the seedlings from 2003. These were planted in February/March on various young trees around the garden ( no older trees available as the garden is only 5 years old). Hope to be doing similar checks on some of the London mistletoe plantings next week – there’s a meeting of the London Mistletoe Action Plan next Tuesday. The plantings there will be more difficult to review – as most are on more mature – and much taller – trees. More on those soon.
But for now, just the saplings – and first stop is the apple. Apple is mistletoe’s favourite UK host and so these should be doing well – and so they are – even though there’re only about 10 mm long. Mistletoe does develop annoyingly slowly in its first 2 years – just a small growth from the seed to the host in year 1 and then a slightly larger growth out from the host in year 2.
The pics below show two separate plants – one with its first true leaves. 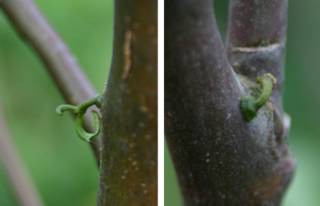