I feel humbled. The weirdometer went off the scale today, and when I mentioned this later to one of those involved they replied that this was ‘merely’ a community exercise (so perhaps I should recalibrate the weirdometer). ‘This’ was the druid mistletoe rite, which I was privileged (and I mean that very sincerely indeed) to attend this evening.

I don’t know where to start really, and I don’t even have any photos to show you (it would have been very disrespectful to take them). The meeting was an inaugral meeting of the Mistletoe Foundation, a druid initiative seeking to rediscover the mistletoe rite and new approaches, not least propagating as well as harvesting the plant. A new sustainable approach. (for more info go to http://www.druidnetwork.org/mistletoe/index.html)

The location, at a bunk barn on a farm co-operative (http://www.ragmans.co.uk) in the Forest of Dean was masterful – lots of mistletoe about, and the right facilities. The event, attended by druids from all over the country, and from varying sects, was momentous. I attended as an outsider and, as far as I could tell, I was the only non-initiate present.

The programme included preparation for the rite, the rite itself (scheduled for 6pm) and tomorrow, discussion of how to take the initiative forward (more on that tomorrow). Today’s event started at midday, with preparation of ivy head-dresses etc, but the real action began at 1.30, when we gathered to discuss how to approach the rite. I won’t go into detail – it would take too long, and is druid, not public, business. But this involved lengthy discussion of how the rite should be approached, what form it should take, how it should relate to Pliny the Elder’s account of the rite (which included the sacrifice of 2 white bulls – not an option to the neo-druid) and who should do what and when. There was debate, and difference of opinion – not surprising when you realise that the day was attended by druids from varying groups and beliefs. But a programme was agreed, reviewed, and agreed again.

We started at 5.30. I say we, but I inevitably felt myself to be an outsider, unfamiliar with accepted otherwise accepted process such as calling the ancestors, calling the quarters (spirits of the N, S, E and W) etc. But everyone was so friendly, and personal beliefs seemed (and are) secondary to the spirit of the whole, of the ‘tribe’. A mistletoe-bearing tree (an ancient pollarded lime) had already been selected, just a few minutes walk away, a sickle had been forged especially, with the smith present, and a cloth to catch the mistletoe (it must not touch the ground) had been especially woven.

The weather was not good. Tonight was the 6th of the new moon, the night Pliny suggested the Druids enacted this rite. But unlike yesterday the moon was shrouded, and we began under drizzle and ended in light rain. But the determination to succeed was strong – beginning with the ritual burning of dry mistletoe from last year in an open-air fire – to rid each of their banes – and we all took turns. This burning of last year’s mistletoe, kept indoors since last winter, is a strong local custom, and not confined to the druids.

From here we processed, in twos, to the pond, with a ritual gift thrown into the waters. And finally, in the dark and wet, over the slippery ground, which most traversed in their robes, to the mistletoe tree. Again I won’t go into detail, as this is not my business to recount. The sickle was produced, in ceremony, and the appointed tree-climber was approached and climbed the tree – in the dark, in the rain, and dressed in robes (he did have a head torch). It was an awe-inspiring sequence – would he make it up the tree, would he reach the mistletoe, would he cut enough, and, critically, would it fall into the outstretched cloth below. Lastly, would he make it down again safely? The answer, to all the above, is Yes. The communal sense of relief was almost physical, and the procession back to the fire was jubilant. We had closure, and relaxation until tomorrow… I had to go, but agreed to return in the morning for the next session – on what to do with the harvested material, and how to progress the Mistletoe Foundation.

More tomorrow… In the meantime take inspiration from this picture of the druidic mistletoe rite, a reproduction of Henri Paul Motte’s famous (c 1890) painting (click to enlarge) 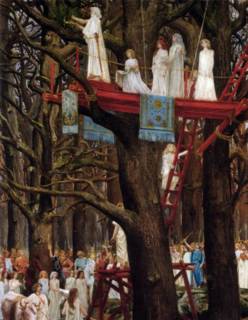