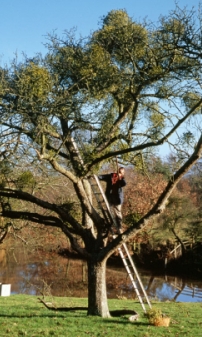 There’s potential for a little confusion out there, not least because of the similarity in names. Many (including me) use the phrase ‘English Mistletoe’ in either trading names or web addresses and so differentiation, and customer referals, might get complicated! Even the original Tenbury English Mistletoe Enterprise, which I helped set up and run from 2004 to 2009, has dropped (under new management) its Tenbury name and is concentrating on just the ‘English’ bit. That move is, in my opinion, a bit of a marketing faux pas, as the Tenbury name is a stronger trading terroir name for mistletoe than just English, but I shouldn’t lose sleep on it as it’s not my problem anymore. Though it does mean that no-one, as far as I can see, is trading mistletoe online under the Tenbury name. A few are from Tenbury – but that’s not clear until you visit their sites – it’s not being used to attract customers in.  There’s an opportunity there for someone…

But Tenbury isn’t the only place with mistletoe – it’s just the traditional trading centre in a wider area that has a lot of mistletoe  – so maybe more generic names are inevitable.

Here’s a quick round-up of some of this season’s contenders so far (I’ll add any others as they appear…):

The English Mistletoe Shop – the site I established last year to market mistletoe grow-kits and books is also supplying fresh mistletoe this season – from sites across the ‘three counties’ of Worcs, Herefs and Glos. Retail only. Based in the Severn Vale around Gloucester. Can be found at www.englishmistletoeshop.co.uk or at  www.buy.mistletoe.org.uk

Kiss Me Mistletoe – the Adams family of Eastham Park Farm, just outside Tenbury. Using a new website developed after their forays into online trading last year. Retail and wholesale. Organic mistletoe from their own farm. Can be found at www.kissmemistletoe.co.uk

Treetops Shop – the Neath family of Abberley, to the east of Tenbury. Established Christmas tree traders with a strong mistletoe sideline – mostly wholesale but some retail trading too. Can be found at www.english-mistletoe.co.uk

InterMistletoe – the seasonal persona of InterRose of Suffolk, trading Tenbury-bought mistletoe stock from a base in Lowestoft. Strong on retail, and some wholesale too. Can be found at www.intermistletoe.co.uk

English Mistletoe (not sure of formal trading name) – Shropshire-based and apparently concentrating on wholesale supplies to florist, gift shops etc. Can be found at www.englishmistletoe.co.uk

Confused? You will be if you try comparing that lot, who have widely varying prices – some very expensive this season, others looking like very good value.  Some haven’t declared their hand on prices yet…

PS – the English Mistletoe Shop is claiming a first this season – the first mobile phone optimised mistletoe site – you’ll find that at  www.mistletoemob.org.uk .  It won’t look good on a full screen device, but try it out on a mobile…