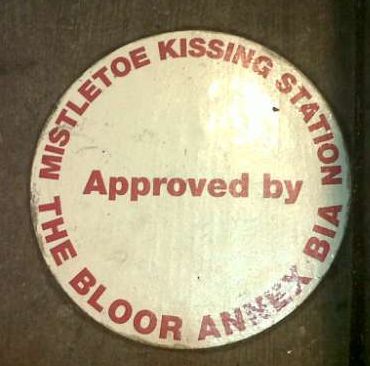 The Utah mistletoe kissing experiment reported earlier isn’t unique – they have something similar, though not for research, in Toronto. 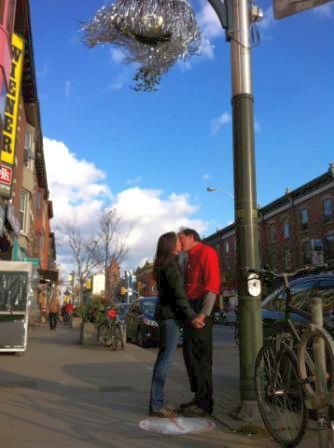 There they have a whole street (Bloor Street) with 21 ‘kissing stations’ set up along it – each marked with a circle on the pavement/sidewalk and each with a little bunch of mistletoe hanging up above.

It’s difficult to tell from the pictures but it looks as if they might be using real mistletoe (though it could be plastic!) under that ball of tinsel (unlike that Utah experiment).  Though this would be one of the American Phoradendron mistletoe species, not the ‘proper’ European mistletoe of true kissing tradition (but that would be hard to come by in Toronto).

The project has been organised by the Bloor Annex Business Improvement Area as part of their promotional activity – and is, perhaps, a concept we should consider over here – not least in Tenbury Wells (it would test the nerve of people walking along Teme Street if there were two dozen kissing stations dangling over the pavement…).

TV news story about the Toronto kissing stations below: