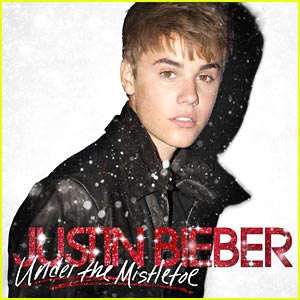 Online mistletoe news over the last week or so has been dominated by the Bieber, who, I want to state right now, is not one of my favourite artists – but then I’m not a star-struck teenage girlie (just thought I’d get that clear too).

The reason?  His new album is called Under the Mistletoe and the single is called Mistletoe.

But judging by the much-hyped (see video below) cover art the young (17), clean-livin’ (v religious apparently) Justin doesn’t seem to quite get mistletoe – where is it?  why isn’t he glancing up at it? and why aren’t his lips pursed ready for those kisses?

The single, and the inevitable video, are out soon, so maybe then we’ll see if he understands the kissing thing.

In the meantime,  for all you Beliebers out there, here’s a fantastically pointless news video announcing that unremarkable album cover: