Last week I joined a brief, early morning, urban mistletoe hunt with BBC Radio Gloucestershire. They had spotted mistletoe on trees in central Gloucester and wanted to discuss whether this was unusual.  The short answer to that is, no, not at all unusual here in Gloucestershire where mistletoe is common, but both yes and no elsewhere in the UK.  It all depends on where you are.

[The hunt was broadcast during Mark Cummings’ show on 23rd November. You can hear the whole programme on iPlayer here – but only for a few weeks and anyway the mistletoe is scattered throughout the programme. A bootleg edit, with just the the mistletoe-laden bits, can be heard here]

The first thing to understand about mistletoe in urban locations is that, in theory at least, trees in urban areas are ideal for it. You might think, like the BBC Glos reporters did initially, that mistletoe is a plant of the wider and natural countryside. But, actually, mistletoe’s need is for isolated trees – trees well-spaced away from others.  Natural woods may have a lot of trees, but those trees are close together – so woodland trees are not good mistletoe hosts.  The trees of man-made habitats – orchards, hedgerows, roadsides are much better for mistletoe as they are set apart.  And, therefore, trees in the urban environment – street and garden trees – are ideal for it.  It should not be unusual.

Nevertheless most people seem to think it is unusual in towns – possibly for one or both of two reasons.  One being that mistletoe is generally only found in quantity in the south-west midlands, so is not common enough to spot – in urban or rural environments – across most of the UK.  The other reason is observation – people don’t look up enough! In the wider countryside you can spot mistletoe from miles away – with the distinctive aerial growths showing up in tall trees across the landscape.  In towns the landscape is much closer, hemmed in by buildings, so you don’t get that wide view that will show mistletoe a long way off.  You may only be able to see it when close to it, and then only by physically looking straight up!

Here in the Severn Vale of Gloucestershire mistletoe is common everywhere – rural or urban – and very obvious in both Gloucester and Cheltenham. Especially in Cheltenham, where there are huge amounts in many of the street trees. Probably too much actually – but that’s a story for another time.

Outside of the vale, but still in mistletoe country, there are many other mistletoe towns; one particularly favorite of mine is Malvern, where there are scattered colonies throughout. Much further afield there are thriving colonies in and around Richmond (SW London), Cambridge, parts of Oxford, and even small areas of Edinburgh (and even Dublin!) well outside mistletoe’s natural range.  Urban mistletoe thrives – and urban gardens could even become, as rural orchards decline, the primary habitat for mistletoe in Britain. 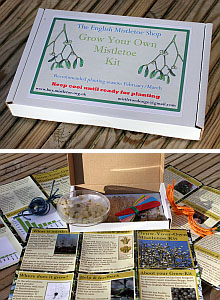