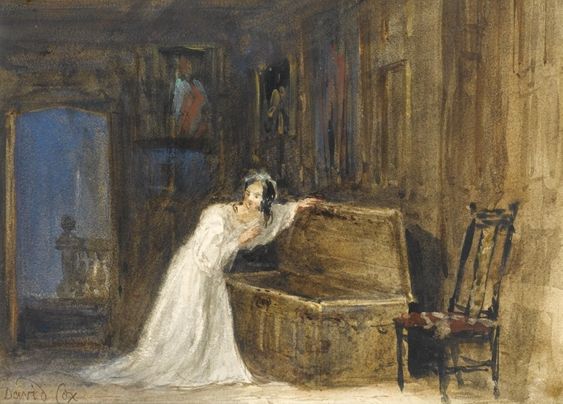 The street drama at Tenbury’s Mistletoe Festival this year was based on the legend of the Mistletoe Bride, immortalised in Thomas Haynes Bayly’s song/poem The Mistletoe Bough, penned in the 1830s and purporting to tell the story of a tragedy that took place at a Christmas wedding. During a post-wedding game of hide and seek the bride, who hid in a trunk in a forgotten attic, found herself locked in, was never discovered, died and was only found, eventually, many years later as a wedding dress-clad skeleton.

The story has caught popular imagination for many years – so much so that it was apparently sung in every house at Christmas in the mid-nineteenth century. This despite it being such a horror story! Several great country houses, some now gone, laid claim to be the location, some of them reckoning that they still possessed the actual trunk! Modern versions sometimes extinguish the horror of the story by conjuring a happy ending – for example in Tenbury’s version last weekend the dead bride is brought back to life with mistletoe (what else?)

But is it, even remotely, true? And if so which great country house is the real location? Contenders include Castle Horneck (Cornwall), Exton Hall (Rutland) Bawdrip Rectory (Somerset), Marwell Hall, Bramshill House (both Hampshire), Brockdish Hall (Norfolk), Basildon Grotto (Berkshire) and Minster Lovell Hall (Oxfordshire). Which one is true? Or did a similar thing happen at all of them? Surely not.

Bayly’s poem (put to music by Sir Henry Bishop) refers to a Lord Lovell, and Minster Lovell Hall is often considered the most likely contender. But there’s no historical account of any such happening there – and, as Minster Lovell Hall itself is now derelict, there’s no attic to see, and no trunk to peer into. It is said to be haunted...

We spent a speculative afternoon there back in the summer – trying to imagine the place in its heyday (helped by a useful interpretation panel) and vaguely looking around for any suggestive mistletoe growing nearby as a token symbol – but there wasn’t any. Though it was summer, so it wouldn’t have been obvious…

The whole story is, sadly, probably just a fanciful invention – what we’d call an Urban Myth these days. There’s some evidence it is based on similar stories from mainland Europe, where similar lost bride stories abound – one of the best known of these is an Italian story about a bride called Ginevra – though the best-known version of this is a very similar verse to Bayly’s, written by the English poet Samuel Rogers in 1822 – which is, probably, where Bayly got his inspiration from 10 years later – though it was Bayly who implicated mistletoe.

Bayly’s cheerful verse is given below – you can read Rogers’ version at the Urban Myths website here.

The mistletoe hung in the castle hall,
The holly branch shone on the old oak wall;
And the baron’s retainers were blithe and gay,
And keeping their Christmas holiday.
The baron beheld with a father’s pride
His beautiful child, young Lovell’s bride;
While she with her bright eyes seemed to be
The star of the goodly company.

“I’m weary of dancing now,” she cried;
“Here, tarry a moment-I’ll hide, I’ll hide!
And, Lovell, be sure thou’rt first to trace
The clew to my secret lurking place.”
Away she ran-and her friends began
Each tower to search, and each nook to scan;
And young Lovell cried, “O, where dost thou hide?
I’m lonesome without thee, my own dear bride.”

They sought her that night, and they sought her next day,
And they sought her in vain while a week passed away;
In the highest, the lowest, the loneliest spot,
Young Lovell sought wildly-but found her not.
And years flew by, and their grief at last
Was told as a sorrowful tale long past;
And when Lovell appeared the children cried,
“See! the old man weeps for his fairy bride.”

At length an oak chest, that had long lain hid,
Was found in the castle-they raised the lid,
And a skeleton form lay moldering there
In the bridal wreath of that lady fair!
O, sad was her fate!-in sportive jest
She hid from her lord in the old oak chest.
It closed with a spring!-and, dreadful doom,
The bride lay clasped in her living tomb!

3 thoughts on “Urban Mythletoe – the story of the Mistletoe Bride”