Roll on Christmas! Am rapidly becoming all mistletoed-out now. This week has been very mistletoey – markets, harvesting, talks, media interviews etc. But most of that is over for this season now, so there is a brief mistletoe-free period looming. Only brief though – as mistletoe activities resume in the new year with planting and management projects.

The Tenbury mistletoe auctions this week were a complete contrast to the end of November. Prices then seemed high – unsustainably so – and it’s no surprise that they dropped hugely by this week. Indeed some mistletoe lots remained, I think, unsold, with others only fetching £2 or £3 per bundle (compare this to the £30+ they were fetching 2 weeks ago). Holly prices also fell – also from an unfeasible high a couple of weeks ago. 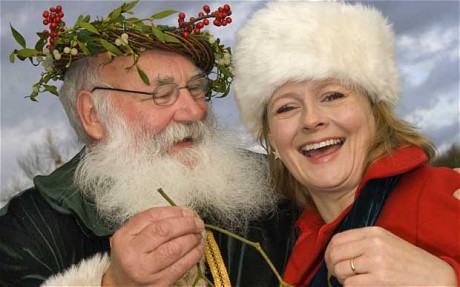 Media attention has been good this week – the auctions feature in yesterday’s Telegraph, in a piece by Xanthe Clay (left, with Green Santa), who has penned a thoughtful view of the auctions and mistletoe in general. Much more interesting than most of the mistletoe coverage in the papers!

We’ve also had the BBC out in Tenbury – filming a feature for The One Show, due for broadcast next Thursday (22nd) . Another (I hope) thoughtful piece, with footage and interviews featuring harvesting, mistletoe’s form and growth, the druid take on mistletoe, plus scenes in Tenbury town at the Mistletoe Festival’s Mistletoe Outlet and talking with passers-by. Will say more on that when it’s broadcast.

My last mistletoe talk, this side of Christmas, was this week too – next gig isn’t until mid-January, which gives me a chance to redesign the powerpoint show with new pictures from this season  But other mistletoe activities aren’t over yet – more media plus a load of commercial mistletoe work in the next few days…