Mistletoe made it to the BBC’s breakfast programme this morning (ITV did the same last Friday), with their weather broadcast live from Tenbury Wells Mistletoe Auction site, where mistletoe lots are already laid out for tomorrow’s second sale. 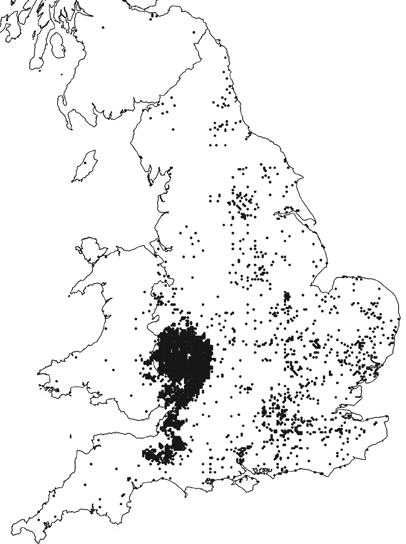 The BBC’s weatherman, Alex Deakin, gave a reasonably good (i.e. accurate) account of mistletoe, but he did keep saying that mistletoe is in the area ‘because of the apple orchards’ – which isn’t really true. To be fair it it is a widely-believed myth, based on the undeniable fact that msitletoe does well on apple and is common in the apple growing areas of Herefordshire, Worcestershire, Gloucestershire, Somerset and Gwent (see distribution map left – click to enlarge).  But that doesn’t add up to why it’s there.

So why, if not apple orchards, is it so common in this area, and why is it so common within the apple orchards?  Well, the answer to first question is is climate – it grows best in those areas because they suit it climatically.  It’s a pity that Alex, as a weatherman, didn’t pick up on this key factor.

Mistletoe’s distribution in the UK (and indeed the rest of Europe) can be explained with summer and winter temperature minima and maxima studies, which show that it only thrives in areas with particular patterns of low winter temperatures and high summer ones.  Outside these optimal areas it will grow, particularly in parkland and gardens sites, but subtleties of climate limit its ability to spread.  Hence the scattered, but very incomplete, smattering of mistletoe colonies across the rest of England on the map.  It is very rare in Wales and Scotland – but again will grow if encouraged, with little subsequent spread.

The best way to demonstrate that orchards are NOT the cause of this distribution pattern would, of course, be to re-plot that national distribution map with the apple orchard mistletoe data removed – but that’s not yet been done. I must try it with the national dataset from the 1990s survey and see how convincing it is…

And what about apple orchards then – why are they the ‘favoured’ habitat?  The answer to that is that apple happens to be a favoured host, and that as mistletoe only thrives in trees in open situations (i.e. not trees in woods), an orchard layout is ideal.  So an orchard of apple trees in the best climatic area is perfect – ticking all of mistletoe’s boxes.  But so is a garden apple tree, a parkland lime tree (limes are another very good host) or a waterside poplar tree (poplars are good hosts too).  Analysis of the national data shows that mistletoe’s host and habitat ranges are widest within the core climatic area, decreasing progressively (in favour of just apples, limes, gardens and parkland) further away in all directions.  Most of the mistletoe in ‘wild’ habitats (riversides, open scrub, etc) are in the core area.

Things may be changing though – over the last 10 years there have been many reports of increasing mistletoe spread outside the core area, possibly attributable to subtle climate change and/or changing winter bird (particularly Blackcap) populations. For more on this have a look at my review in the October issue of British Wildlife

One thought on “Why mistletoe grows where it grows”